I've already talked about Feugh Lodge in a previous post.  This was the home where my great-grandmother, Nellie, worked as a kitchen maid from 1910 until 1912.  There are a couple of postcards in my collection that show the Feugh River that runs beside the house.  One was mailed, the other only has a brief note (I'm skipping forward a bit here in the chronological order of the postcards - humour me).

Here's the one with the message: 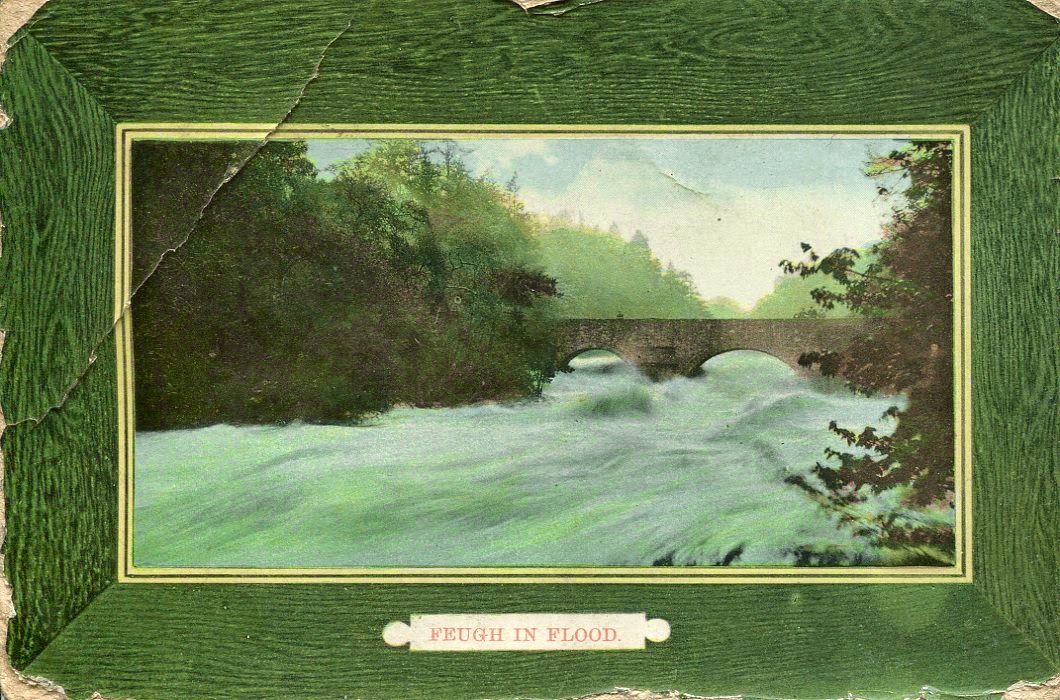 It is obviously a coloured photograph of the Feugh River while flooding.  I don't think I'd want to be near it when it did this.  But Nellie was as you can see from her note:  "Feugh Lodge 24/10/11 Thank you so much Jack for the nice views I received this morning.  They are lovely.  This is what the feugh is like today.  Nellie"  She was working here by August, 1910, so she had been here for over a year when she sent this postcard. 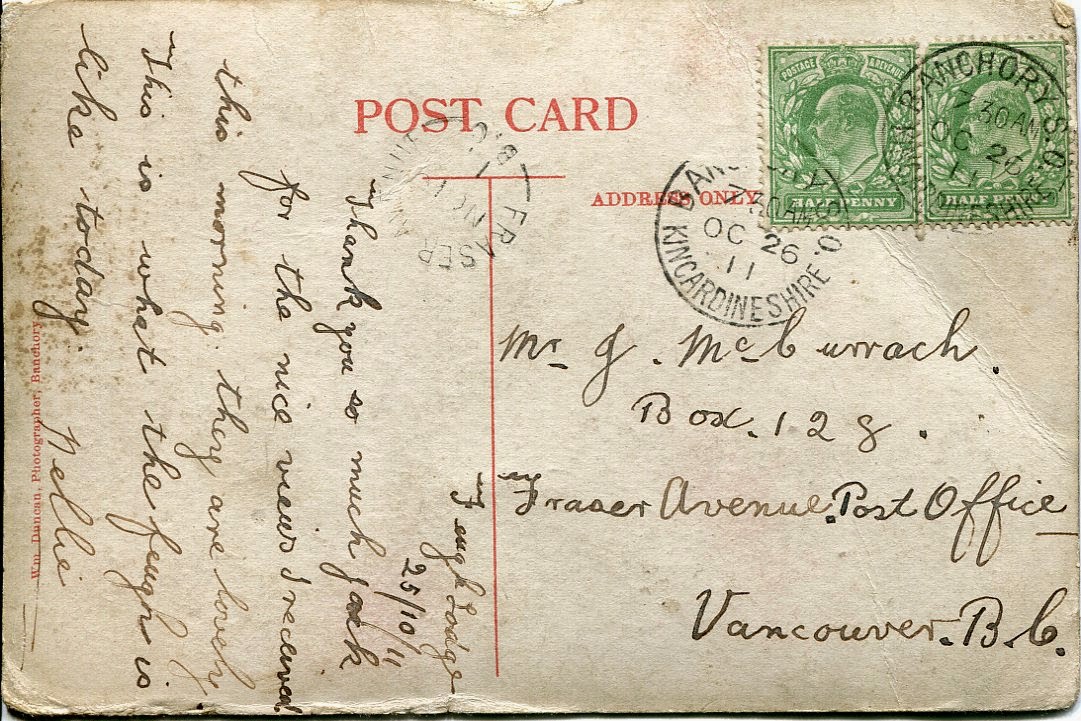 This one is also postmarked twice - like the postcard of the football game.  This one is postmarked Banchory, Kincardineshire (the community closest to Feugh Lodge) and then postmarked Fraser Avenue, BC.  The Vancouver-Fraser Avenue Post Office was established December 1, 1910 - not even a year before this postcard was received by Jack.  You'll note that he was picking his mail up there - and it was obviously coming over by ship and rail.  There is no Fraser Avenue in Vancouver anymore.  In 1948 it was renamed Fraser Street.  You may also note that postage to Canada is two half penny stamps - as opposed to just one within Scotland. 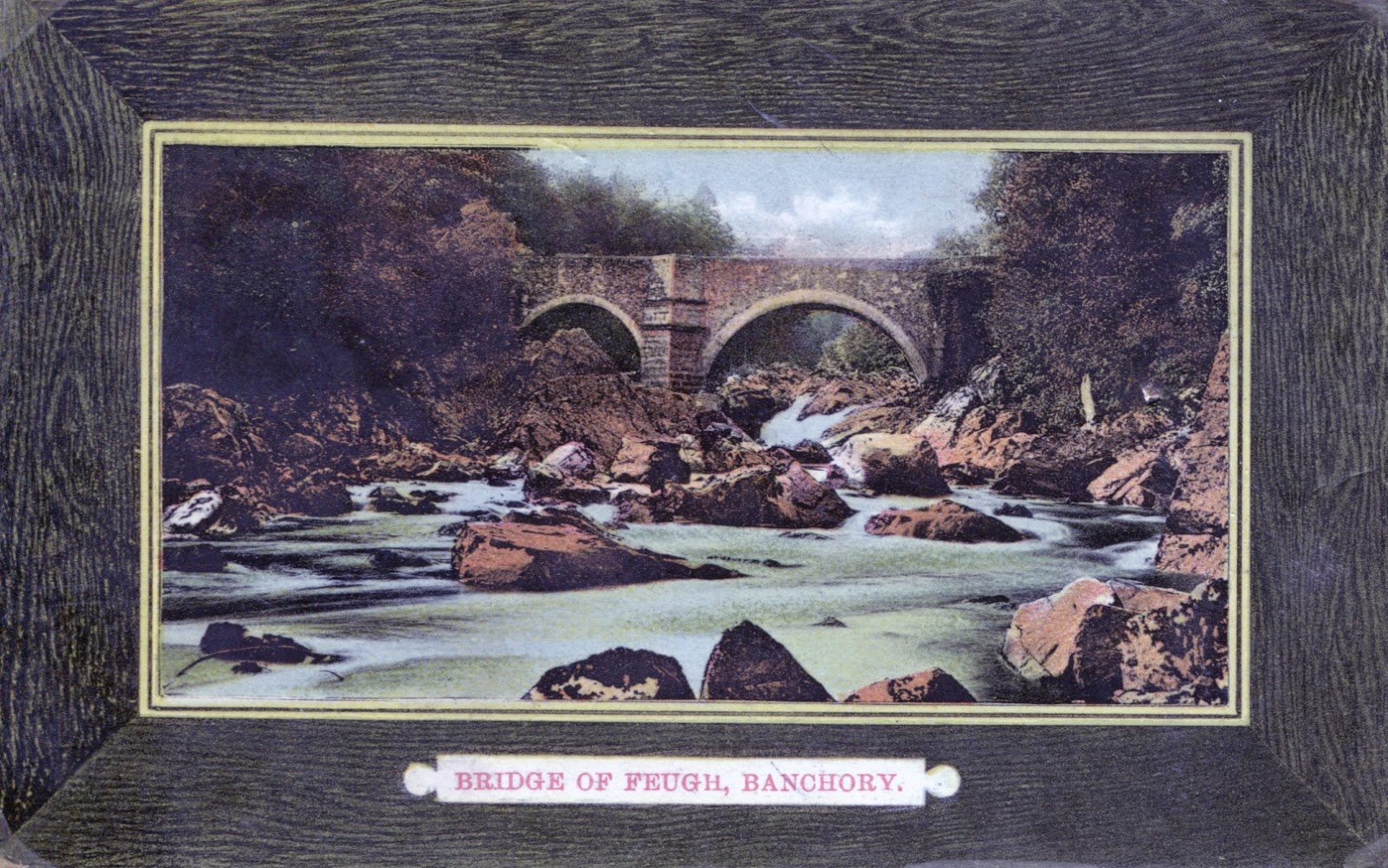 This card, part of the same series by William Duncan, a photographer from Banchory, was a view of the river when it wasn't in flood.  It must be interesting to live near this river.  On the back is a note from Nellie reading: "This is a bridge, about a ten minutes walk from the House.  Nellie"  I assume this one was written shortly after she moved there, but since it was mailed in an envelope or handed to it's recipient in person, we won't know exactly when it was sent in her two years living and working here.

Aside from the postcards and the information they contain, I've written this post now to fill you in on the owners of Feugh Lodge where Nellie, my great-grandmother, worked and earned money to help establish her new life in Vancouver.  Over the last couple of days I've been able to research them a bit and it's quite interesting (let me tell you, if your family was wealthy, there's a lot more to research and it's MUCH easier!).

John Poynter Miller was the owner of Feugh Lodge and my great-grandmother's employer.  He owned the lodge and at the time the 1911 census was taken, was the head of a household made up of his wife, 4 female servants, and a chauffeur.  He was obviously wealthy and, in turn, considered important.

First off, let's talk about finding his name.  Here is the census record with his name noted:

Okay, you tell me, what is that middle name written in there?  At first I thought it was Doyscher. Doyscher is actually a last name (I'm thinking German?), so I thought that was a possibility.  But no luck finding him anywhere.  So I took a closer look at the census.  On the other page his occupation was stated:

Well, that cracked the door open a bit.  I found his father, John Miller senior (1816-1894), who had founded a chemical manufacturing business in Aberdeen with his brother, George.  It was called John Miller & Co. and it was housed at the Sandilands Chemical Works in Aberdeen (which was also established by the company).  They made chemicals - sulphuric acid, sulphate of ammonia, etc.  They also were tar distillers, oil and paraffin wax refiners, and manufacturers of artificial manures (apparently before they were called fertilizers).  They were in on chemical fertilizers from the beginning - something that went hand in hand with gas manufacturing for WWI.

The 1871 census shows the family living at 14 Crown Street in Aberdeen: He seems to have lived there until after they died, and still lived in their home in 1901 with a lot of other people.

Here is a map showing 14 Crown Street, 10 Queen's Terrace and Miller Street (where their business at Sandilands was located): 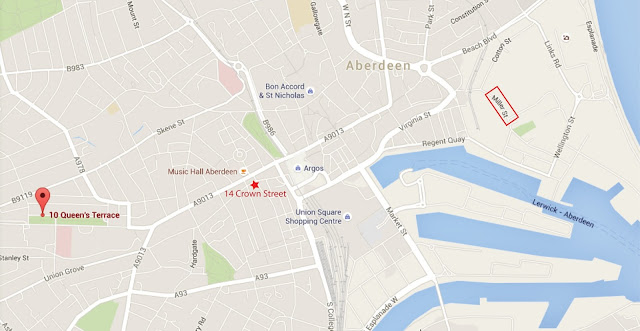 By 1909, John Poynter Miller had moved out of the house and on July 3, at the age of 44, married Edith Margaret Cochran (also from a wealthy family) in London.  They apparently moved to Feugh Lodge after getting married and had hired their housemaid, Nellie, by August, 1910.  (Poynter, really?  Well, after finding it, I can match the letters on the census form, but it really doesn't look like Poynter, does it?).

One last thing - there was always a story in our family that Nellie stayed later in Scotland than she intended because her sister was pregnant and died giving birth.  Nellie, having been a children's nurse, had helped care for the baby before going to Canada after she was adopted out (her name being Peggy Black).  I could find no evidence of Nellie ever being a nurse.  I thought maybe it had been some confusion over the years.  But today, at the University of Alberta Library, I was able to access a page from the London Standard.  A birth announcement came out on August 15, 1911:  "MILLER - On the 10th Aug, at Fengh (sic) Lodge, Banchory, Kincardineshire, the wife of John Poynter Miller, of a daughter."

So she had been caring for the Millers' child at Feugh Lodge and had very recent knowledge of newborns when her sister died.  Family story confirmed.