I've written about Dick (Richard Grant) in several posts (40, 41, 42, 43, 44, 47) and an article.  A friend of my great-grandfather Jack's, he sent postcards as he travelled across Canada headed to World War One.  I had no postcards in the collection that were sent from France while he was in active service.

The only information I had about Dick during the war was from his war records and from the war diaries of the 47th battalion.  The 47th Battalion C.E.F. (Dick's battalion) embarked for France from England on August 10, 1916 and were in the trenches on August 22.  By September 16, some of the men participated in a trench raid. 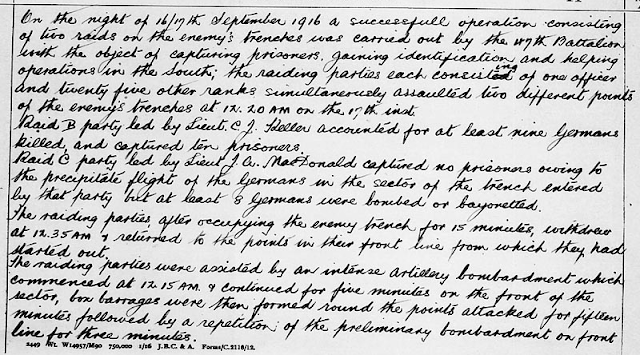 "On the night of the 16/17th September 1916 a successful operation consisting two raids on the enemy's trenches was carried out by the 47th Battalion with the object of capturing prisoners, gaining identification and helping operations in the South; the raiding parties each consisting of one officer and twenty five other ranks simultaneously assaulted two different points of the enemy's trenches at 12.20 AM on the 17th inst.
Raid B party led by Lieut. C.J. Keller accounted for at least nine Germans killed and captured ten prisoners.
Raid C party led by Lieut. J.A MacDonald captured no prisoners owing to the precipitate flight of the Germans in the sector of the trench entered by that party but at least 8 Germans were bombed or bayonetted.
At 12.35 AM returned to the points in their front line from which they had started out.
The raiding parties were assisted by an intense artillery bombardment which commenced at 12.15 AM & continued for five minutes on the front of the sector, box barrages were then formed round the points attacked for fifteen minutes followed by a repetition of the preliminary bombardment on front line for three minutes" 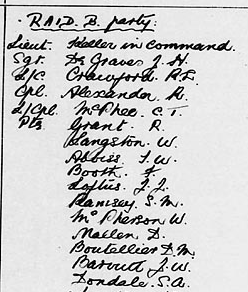 The parties included bombers and bayonetters.  Dick was the latter.  There is no indication as to whether he was responsible for any of the Germans captured (10) or killed (9), but Dick survived the raid apparently unscathed.


I really wished I had postcards from Dick while he was in France, but my collection ended when he was in England before going to the mainland.  A couple of weeks ago, however, my mother's cousin, who is in the process of moving homes, told me she had found three postcards that I might want (yes, please!).  She thought, perhaps, that they might be from Jack and that they should be reunited with the other postcards.  So she mailed them to me (fitting that they once again travelled through the mail).

They arrived a few days later safe and sound within bubble wrap and cardboard - a wonderful package to open a the end of a long, long winter.  The three are lovely examples of hand-embroidered postcards ("Silks") from France.  You can read more about this special postcard type at the Imperial War Museum website here.  And on the back ... the familiar signature of Jack's friend ... Dick.  I was so excited to get a bit more of his story.

Although I know that these were sent from France during the war, they were never postmarked, so I do not know the dates for certain. Dick died on April 13, 1917, so I can safely state they were sent before then and after he arrived in France in August, 1916.  Looking at the notes written on the back of the cards, though, can narrow it down a bit more.  Only two of the cards have messages.

The first we'll look at can be pretty well dated to mid-December 1916.  It is a Christmas card, and the note on the back reads:  "just a card to wish you all a happy Xmas. sorry that I am not with you.  just got back from leave. had a pretty good time. so I hope that you will have the same at Xmas  Dick" 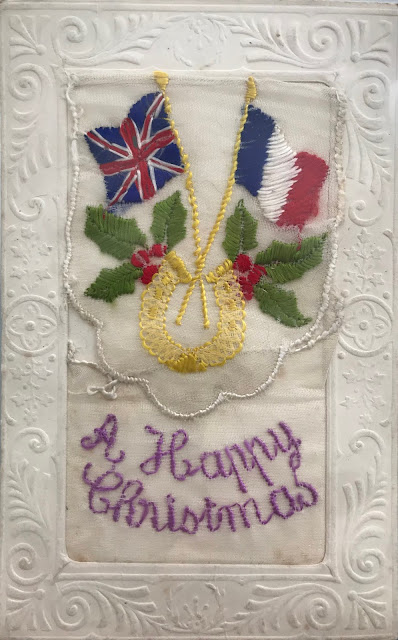 According to Dick's war records, the only time he went on leave was December 2, 1916 for 10 days.  He'd have been back on the 12th or so, and sent this shortly after.

The next postcard has no writing on the back and no indication of when it was bought or mailed, but I'm thinking that Dick probably bought all three of these postcards at the same time when he was on leave. 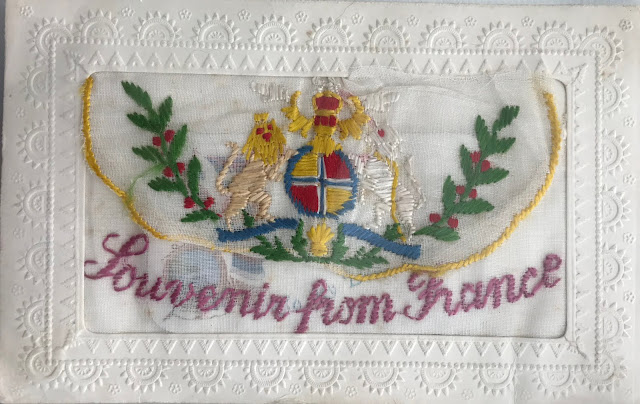 I leave the most poignant one for last: 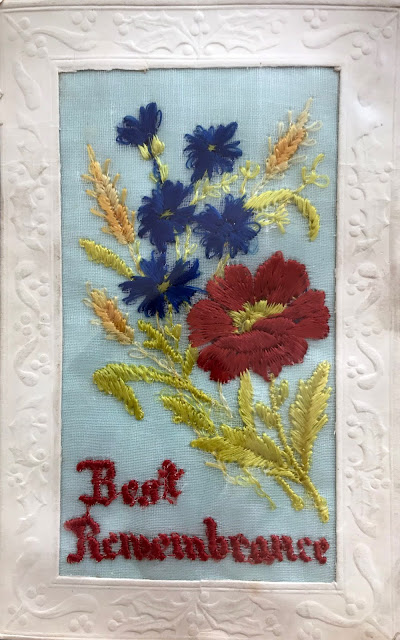 Poignant, of course, because this is a card of remembrance and he died sometime not long after writing this.  And because of the message on the back:  "Dear Mrs McCurrach (Jack's mother, Susanna).  just a P.C. to thank you for the nice box of candys (sic) that you was so good to send me, and I can tell you that it came at just the right time just as we came out o the trenches all wet and cold and I got other two boxes the same night, so we got a big fire going and got the parcels out and I wish that you could have seen us, getting away with that grub. we are getting it a bit hot just now out here and have lost a good lot of the boys.  I had a letter from Jack the other day will try and write him soon.  how is Gladys and Belle.   sorry that I cannot write more so thanking you again and hope to see you soon again. Dick"

Were these the last words Dick wrote to a McCurrach?  I'll never know.

View Next Post
Posted by Sandi Ratch at 1:24 PM