We already know that Dick (Richard Grant) got killed at Vimy Ridge, but I still have three more postcards that he wrote (and that, obviously, pre-date his death).  The first one listed here really should have been shared in the last post about him, as it is from the Rocky Mountains.  It is a "General View of New Grade Reduction Loops and Spiral Tunnels, Field, Canadian Rockies." 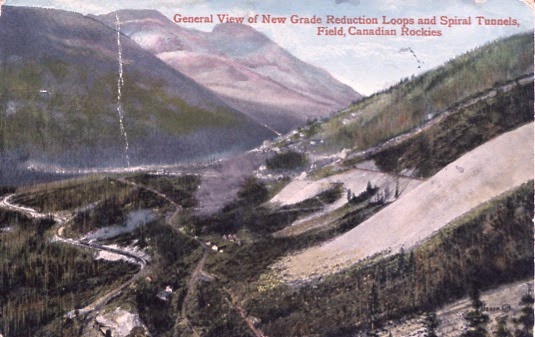 Oddly enough, I just drove through Field on Sunday with my family, and I mentioned the Spiral Tunnels in this past post.  But to re-cap, the spiral tunnels are train tunnels that loop around inside a mountain.  That way the grade could be lower than it would be on the surface, and it wouldn't be as dangerous for the trains and their crews.  In the first 6 km west of the Kicking Horse Pass summit, the Kicking Horse River drops 350m (1,150 ft), creating a 7 km long stretch of track with a 4.5% gradient called the Big Hill (a good 2.5% steeper than most modern railways).  The Big Hill was used (temporarily) from the completion of the Canadian Pacific Railway in 1885 for nearly 25 years until the Spiral Tunnels were completed in 1909 (only 6 years before Dick went through them on the train).  When dealing with the topography of the Rocky Mountains, sometimes you have to get creative - and these designers certainly did.  The tunnels still garner a lot of attention and have their own official stop with information panels explaining them.  You can read all about them here.

On the back of this postcard, Dick writes what is possibly the most poignant of all the messages to date.  Not because of what he wrote, but of what he was facing afterward: 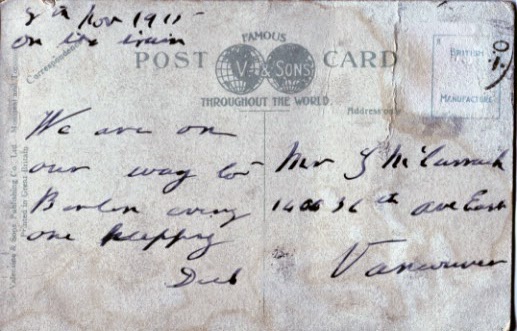 The second-to-last postcard from Dick to Jack is from the R.M.S. Missanabie, the ship he sailed the Atlantic on.  She was 520 feet long, 64 feet wide, had a depth of 41 feet and a gross tonnage of 13,000 (as noted on the front of the postcard - although another site stated 12,469 gt).  Built in 1914, the Missanabie was conscripted into use by the army and was torpedoed and sunk in 1918 off the coast of Kinsale, Ireland - in the same general area as the Lusitania 3 years before. 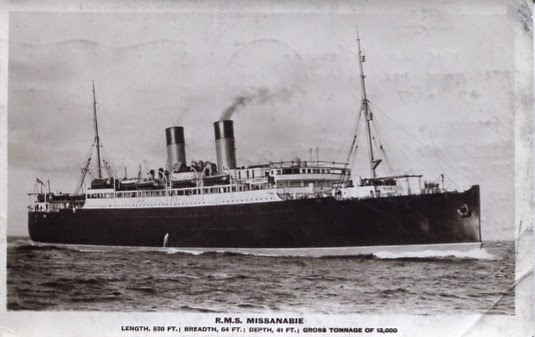 This one is post-marked Quebec City, but was posted from the ship.  The back reads:  "this is our boat we have got started all right.  started ___ on the 13th with a black crow on board.  we had the crow on our train so we are all right give my love to everyone and kiss Gladys for me  Dick."  Gladys was my then one-year-old grandmother. 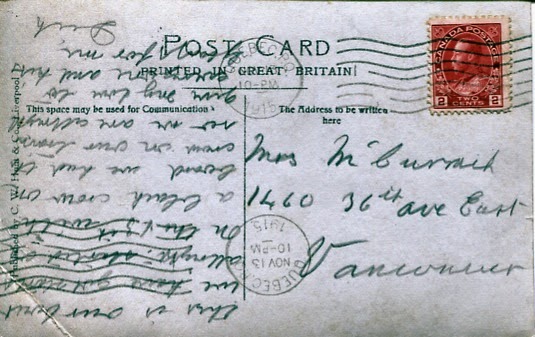 It makes me rather sad to read these postcards now - knowing that Dick never came home, that he died in a nasty battle, that my grandmother never knew him, that he was lost to his family.  Just sad.  And that this hero was nearly lost to history's ravages (as were so, so many of them) is sad as well.