I just shared an older post (#34) with a LinkedIn group and came to the stunning realization that the author of that postcard is none other than the friend, Dick - same guy who was off to WWI.

How did I miss that??

This friend, Dick (who I assume to be a Richard), on December 18, 1914 was in the wilds of BC in Discovery apparently mining for gold.  Less than a year later, in October 1915, he was in the Okanagan Valley at the training camp in Vernon, having joined the 47th Battalion, C.E.F.  By November 11th, 1915, he was on the train in Fort William (Thunder Bay) headed to either Quebec or Halifax to head to England. (Spuzzum Post, Fraser Canyon Post).  [There will be at least 3 more posts upcoming about Dick.]

I have been trying to find out who Dick is, and will continue to look through information on the 47th Battalion as well as the gold rush and see what I can find.  But this is one mystery that keeps intriguing me.

I wrote the above paragraphs last week.  I e-mailed the Royal Westminster Regiment, who perpetuate the 47th Battalion (keep their records since the 47th no longer exist), and found out that they wrote and published a book called For King and Country - 150 Years of the Westminster Regiment.  The book lists all the men who left with the 47th in November of 1915.  The person I e-mailed told me it would be "like looking for a needle in a haystack" to track down a Richard from the Battalion.  He doesn't know me, though, does he.

There were only 150 copies of the book printed.  If I buy it from the Westminster Regiment, it's $65.  From Amazon, it's $99.  But I have a wonderful brother-in-law (BIL) in Vancouver, Bruce Harwood, who is very familiar with the Vancouver Public Library, and today he went and wrote down all the Richards who departed with the 47th in November of 1915.  There were only 10 - I'd have thought there would be a lot more.

Next stop: the Solders of the First World War search page of Library and Archives Canada.  If you have anyone in your past who was in WWI in Canada, you can find information out about them there. You can only look them up by name or regimental number right now, but the Archives are working on a more detailed search engine - and some of the WWI soldiers are on that now.

I started with the first name on my BIL's list - Richard Bell.  There were 22 who were in WWI with Canada.  The one who departed with the 47th was regimental number 629030.  He was from Scotland, so he was a possibility.

Next came Lieutenant-Corporal Richard Hoskin Duce - there was only one of them in the database and he was regimental number 629360 - but he was from England and I'm pretty sure my Dick is Scottish - my GGparents seemed to stick with their fellow nationals a lot.  I wouldn't rule him out, but there was nothing screaming "Dick" to me.

Then came the third name on the list:  "Richard Grant" and something twigged - I have a postcard to a "W. Grant" in Discovery.  Could they be brothers??  There were 9 Richard Grants that went overseas from Canada in WWI.  And 629491 was Richard Grant from Inverness, Scotland.  His attestation paper gives us lots of information.  He was 30 years old (was the same age as Jack's older brother, Alexander), 5 feet 7 inches tall with brown eyes and black hair.  He signed up for the army on September 1, 1915 in Vernon, B.C. - a little over a year after the war started - and after he no doubt lost money trying to gold mine in Discovery.  He was born March 19, 1885, not married, and his next of kin was listed as his mother, Mrs. Richard Grant, who lived at 15 Booth (or possibly Boath) Terrace in Nairn, Scotland!  He was also listed as having the occupation of a miner.  Found him!  Didn't think I would.  Ship's records tell us that Dick travelled to Canada in March, 1912, arriving in Halifax, N.S., on April 1.  He came across on a ship called "Scandinavian" of the Alaln Line.  There is no evidence that any of his family came at the same time.

In the 1901 census and until he left for Canada in 1910, Jack lived with his parents on Roseneath Terrace in Nairn, Scotland.  In the 1901 census, Dick's family lived at 27 Harbour Street in Nairn (on the 1891 census they lived at 25 Harbour Street - I'm guessing that numbering changed, was written down incorrectly on one of the censuses, or was not very fixed).  Here's where their houses were: 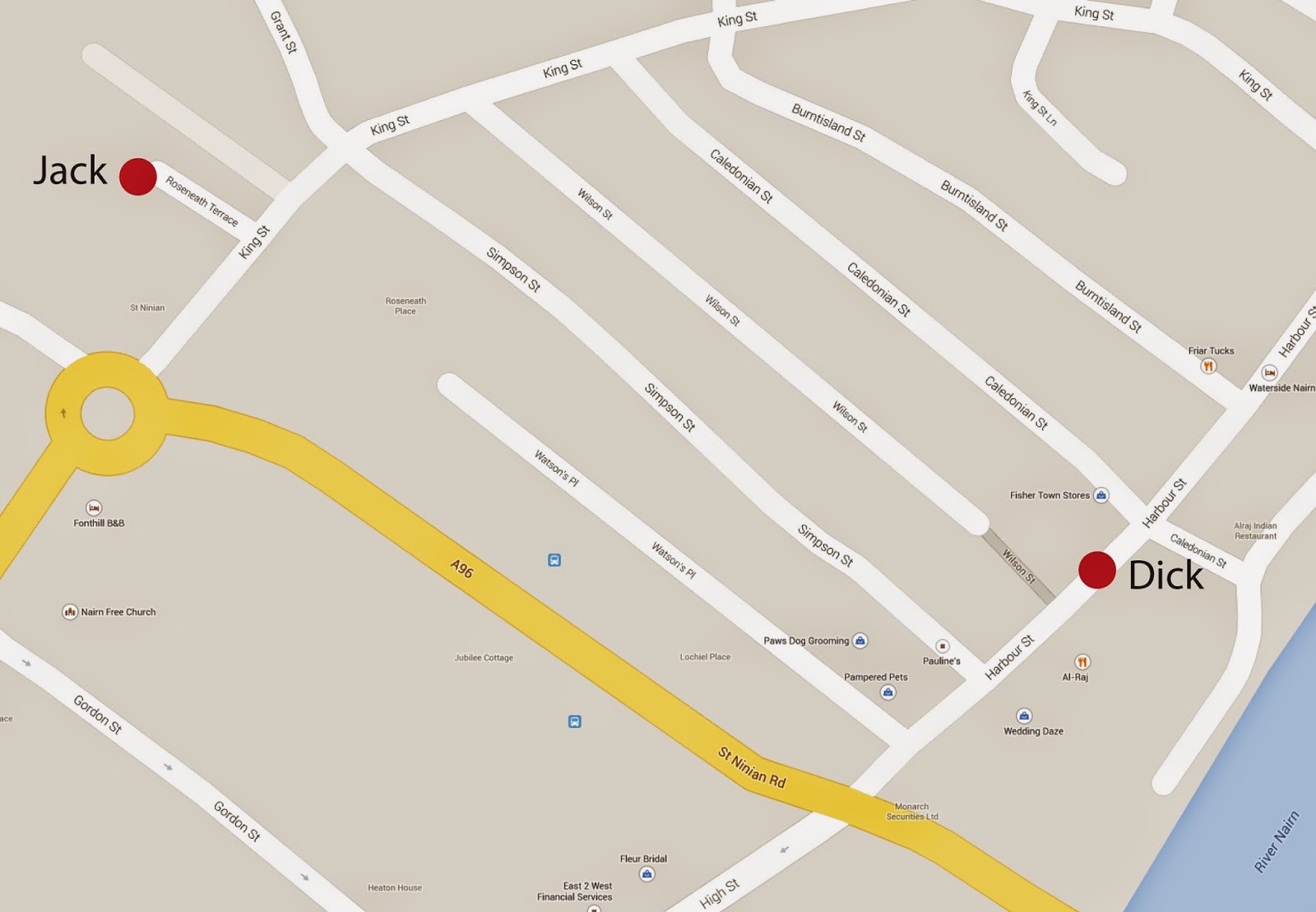 Dick's father was a Market Gardener - so they were likely in a similar financial situation.  But with such a small town, young men of a similar age would have a good chance of knowing each other.

So there we have it.  Dick Grant from Nairn.  His brother, who was a year older than him, was named William Grant who we have a postcard for as well - only further confirming the identity.

Here comes the terribly sad part:  in doing this research, I also found Corporal Richard Grant, Regimental Number 629491, listed on the Canadian Great War Project's webpage.  He was killed in action on April 13, 1917 at Vimy Ridge (I had a good cry over that one - found him and lost him on the same day).  He is buried at the Petit-Vimy British Cemetery in France (photos courtesy of Simon Godly, a very generous man living in France who runs www.webmatters.net): 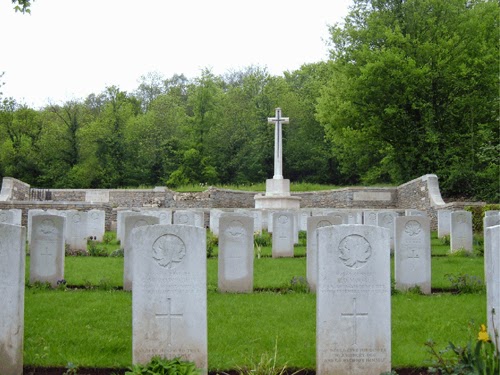 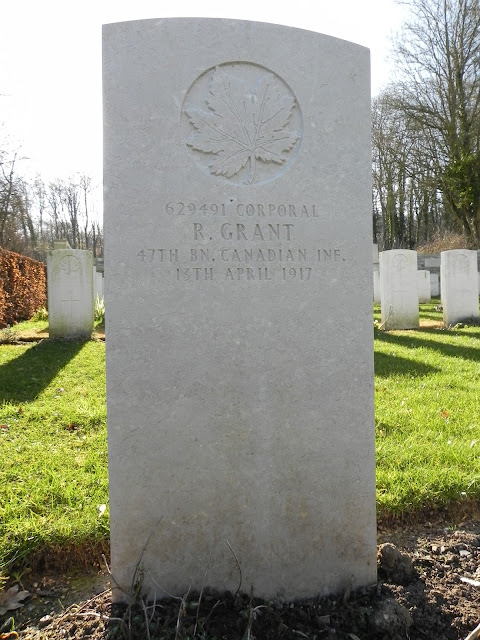 Jack McCurrach, my great-grandfather, and Dick's friend, was transferred to Dick's unit, the 47th Battalion C.E.F., in June, 1917 - I don't know if he was hoping to find his friend still alive and well with the battalion or if he already knew the worst.  My family was lucky - Jack got wounded but stayed alive and eventually got to go home.

I wonder if Dick has anyone to remember him ....

Post Script - Dick does have people who remember him.  After this post was originally published, I got in touch with descendants of his brothers and sisters who still have some of his postcards, and some photographs that might be him.  Like this one: 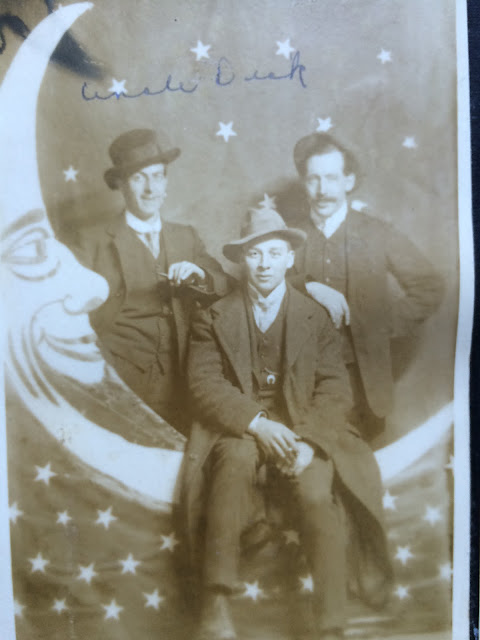 Presumably, from the writing he would be the one on the left.  I love this photograph - very early century.

His family also passed along this one: 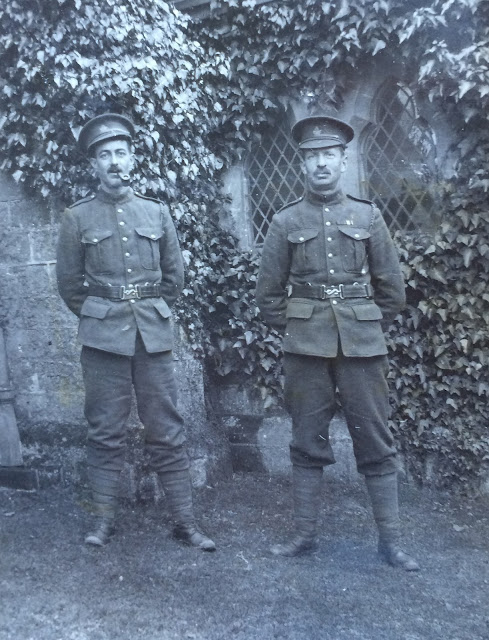 It appears to be him on the left of this one as well.

View next postcard post.
Posted by Sandi Ratch at 2:43 PM