This card is a photograph of a football match played on April 2, 1910. 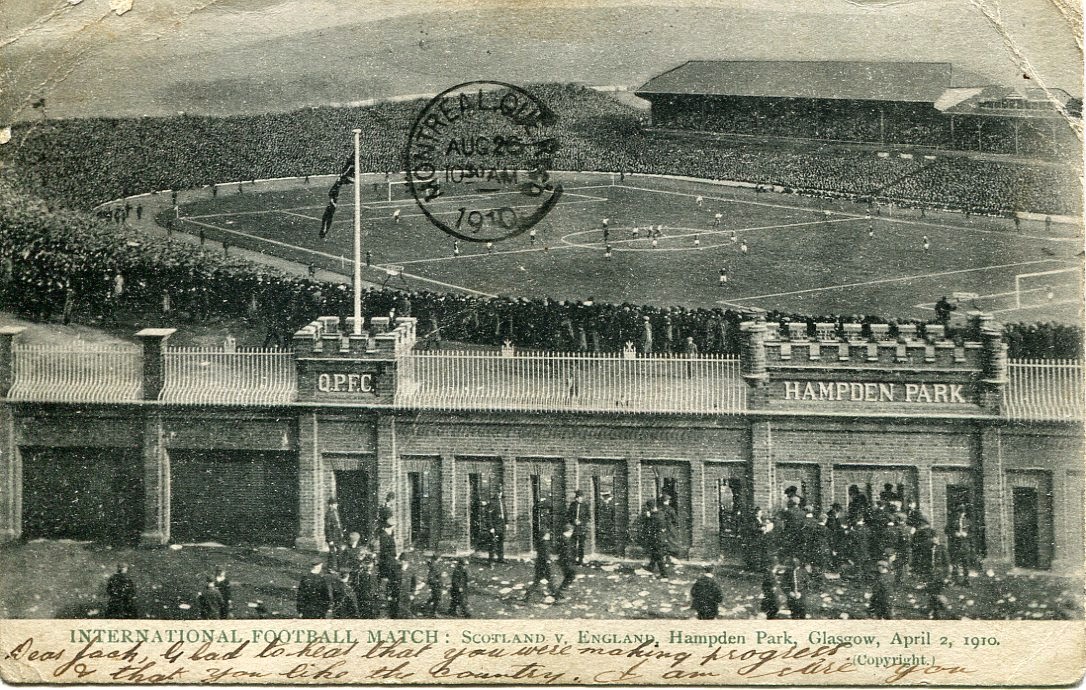 Granted, I know virtually nothing about Soccer.  So forgive me if I state the obvious or get something wrong.  My great-grandfather, on the other hand, was apparently a huge fan.  From what I understand, he played when he was younger and helped run a team when he was older and living in Vancouver.

The game on April 2, 1910 was, obviously, at Hampden Park in Glasgow.  It was between Scotland and England for the British Championships.

This game was a big deal for the Scots.  Not only did they win 2-0, the attendance at Hampden Park was 106,200.  (Commonwealth Stadium in Edmonton, Alberta - the closest city to where I live - only has capacity for 60,000, so in 1910, this was a BIG place).  Goals were made by James McMenemy and James Quinn.  And it's amazing that you can find this information on the Internet.

"Hampden" (if you are a local, and cool, that's what you call it, I understand) is currently (and was in 1910, apparently) the home of the Scotland national football team (soccer, if you live in North America), as well as the amateur league club, Queen's Park Football Club (Q.P.F.C.) - the oldest association football club in Scotland.

A stadium on the current site was opened on Halloween day, 1903 (renovated 1999).  At the time it was built, it was the largest stadium in the world, with a capacity of over 100,000 - today's Hampden Park Stadium only has a capacity for 52,025 (safety was a concern and then renovations further reduced capacity).  John Hampden fought for the Roundheads during the English Civil War - a terrace that overlooked the original Hampden Park, was named after him and provided the name for the stadium.

In 1903, Glasgow actually had the three largest football stadiums in the world.  Hmmm .... wonder why Jack liked football so much ...

You'll note that the P.C. is postmarked August 26, 1910 from Montreal on the front, but August 19, 1910 from Edinburgh on the back - I assume that is because it came by steamer, but I have not seen the same thing on any of the other postcards.

The message on this card is as follows:  "Dear Jack, Glad to hear that you were making progress and that you like the country.  I am sure you are the stuff she wants.  How is B (Bella) getting on?  Was home in July for my holidays and of course enjoyed them very much.  John Macdonald is coming down to stay with me for a week soon.  Hoping to hear from you again.  With kindest regards D.A.G(?)"   (not sure about that last letter). 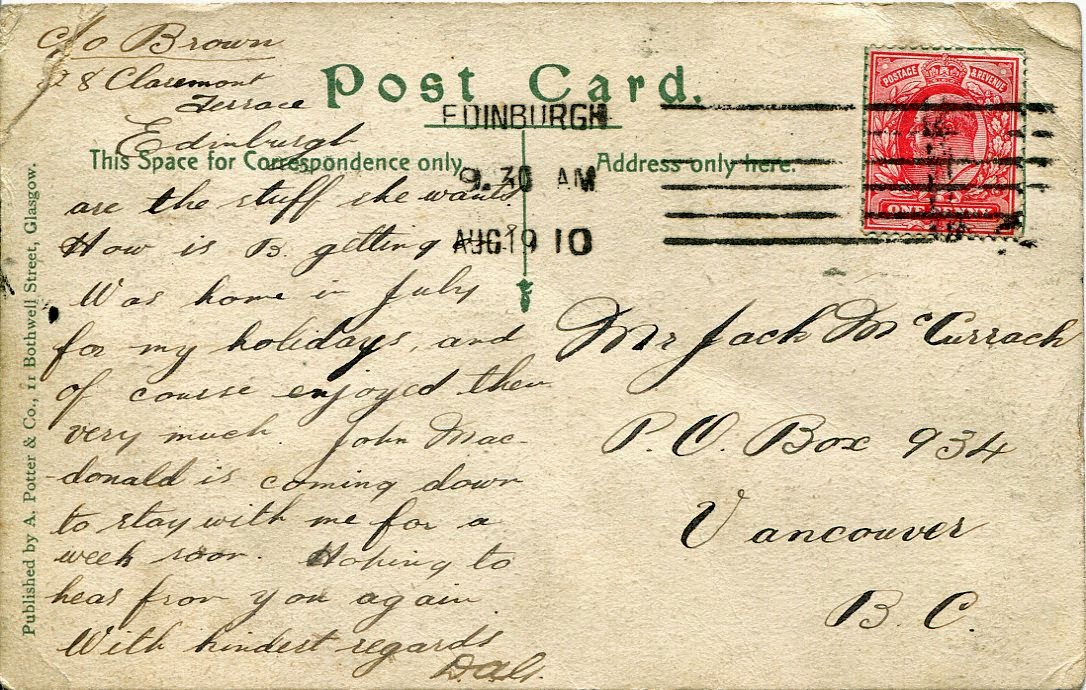 I don't really have much to add to this.  I don't know who John MacDonald was, and finding him would be pretty much impossible at this point (pretty common name).  And I'm not sure who wrote this P.C.  But I'll see if I can find more as time goes on.  Love the hand-writing, though.  Very beautiful script.