So Jack went to Canada ... and Nellie went to work.

I'm not entirely sure what Nellie was doing before Jack left for Canada, but I'm pretty sure she was working in the Aberdeen area as most of the postcards from her are postmarked from that city and her parents were living at Backhill of Bruntyards.  But the first idea of an actual place of work that I have seen is on this postcard of Crathes Castle: 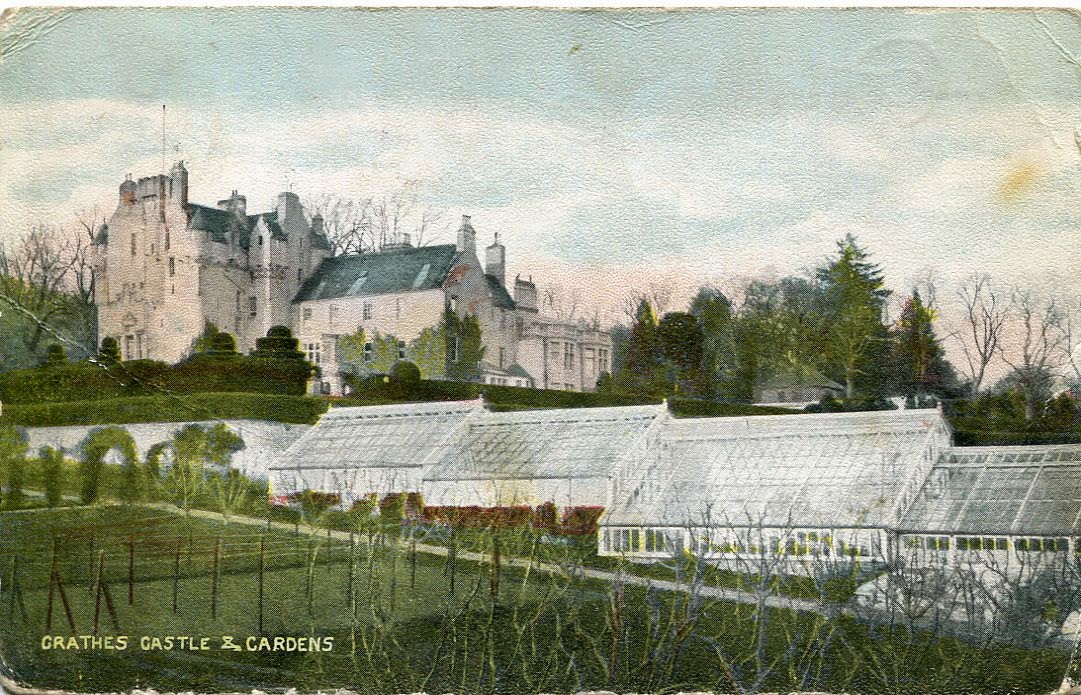 Crathes Castle is located 15 miles West of Aberdeen and 3 miles East of Banchory.  It is a tower house built in the 16th century (started in 1553, completed in 1596).  King Robert the Bruce gave the land the castle is on as a gift to the Burnett of Leys family in 1323 (thank you, Wikipedia).  The Burnett family had originally constructed a fortress called a crannog in the middle of a nearby bog.  The castle served as the ancestral seat of the Burnetts of Ley until the National Trust was gifted it by the 13th Baronet of Leys in 1951.

It's location close to Banchory is no coincidence - this post card is postmarked Banchory, and on the back of the postcard, it is clear that Nellie has written it from Feugh Lodge.  Feugh Lodge is located on the Feugh River not far to the south of the town of Banchory.  It was at this house that Nellie was working.  The text on the back of the postcard reads:  "Feugh Lodge.  How are you liking Vancouver.  Hopes you will get on and be well and happy and are not feeling lonely.  N. Steele"  - the formal signature is due to the fact that this particular postcard was written to Mr. W. McCurrach - Jack's brother, William.  It was sent to a post office box in Vancouver. 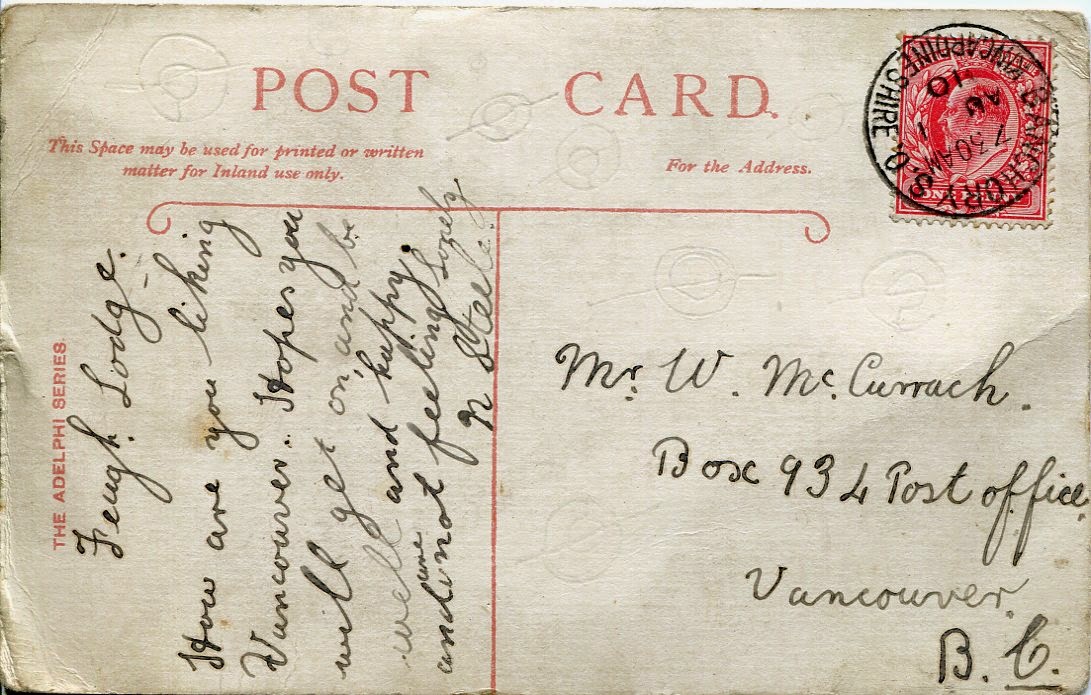 Now for the part of this little story that I find the most fascinating.  As mentioned, the postcard was sent from "Banchory S.O. Kincardineshire" and was written at Feugh Lodge - Anyone know why "S.O."?  I sure don't know.

Anyhow, I looked up Nellie Steele on the 1911 census, and here is what I found (these would go side-by-side, but there isn't room here):

You'll note that Nellie (Helen Steele) is working as one of 4 servants at Feugh Lodge.  She is the kitchenmaid (if you look at the left-hand column in the second image).  She and the housemaid are both 21 years old.  I find it very odd that the Chauffeur, Alexander Brown, is considered a Lodger, not a servant, but is still noted as a domestic.  All of these entries are on the census for Banchory Ternan in Kincardinshire.

This tells me that Nellie was working at the bottom of the hierarchy, at this house of a wealthy chemical manufacturer and his wife (they'd been married a year, were 46 and 33 respectively, and had no children).  She was likely tucking away every penny she could so that she could help establish her life in Vancouver - her wages would likely have paid her way to the New Country.

This collection of postcards contains some that were not written on and obviously bought for memory purposes - in place of having one's own camera, people would buy picture postcards as keepsakes (or they were bought and simply never used) - well, in that part of the collection, imagine my surprise the other day when I found this one: 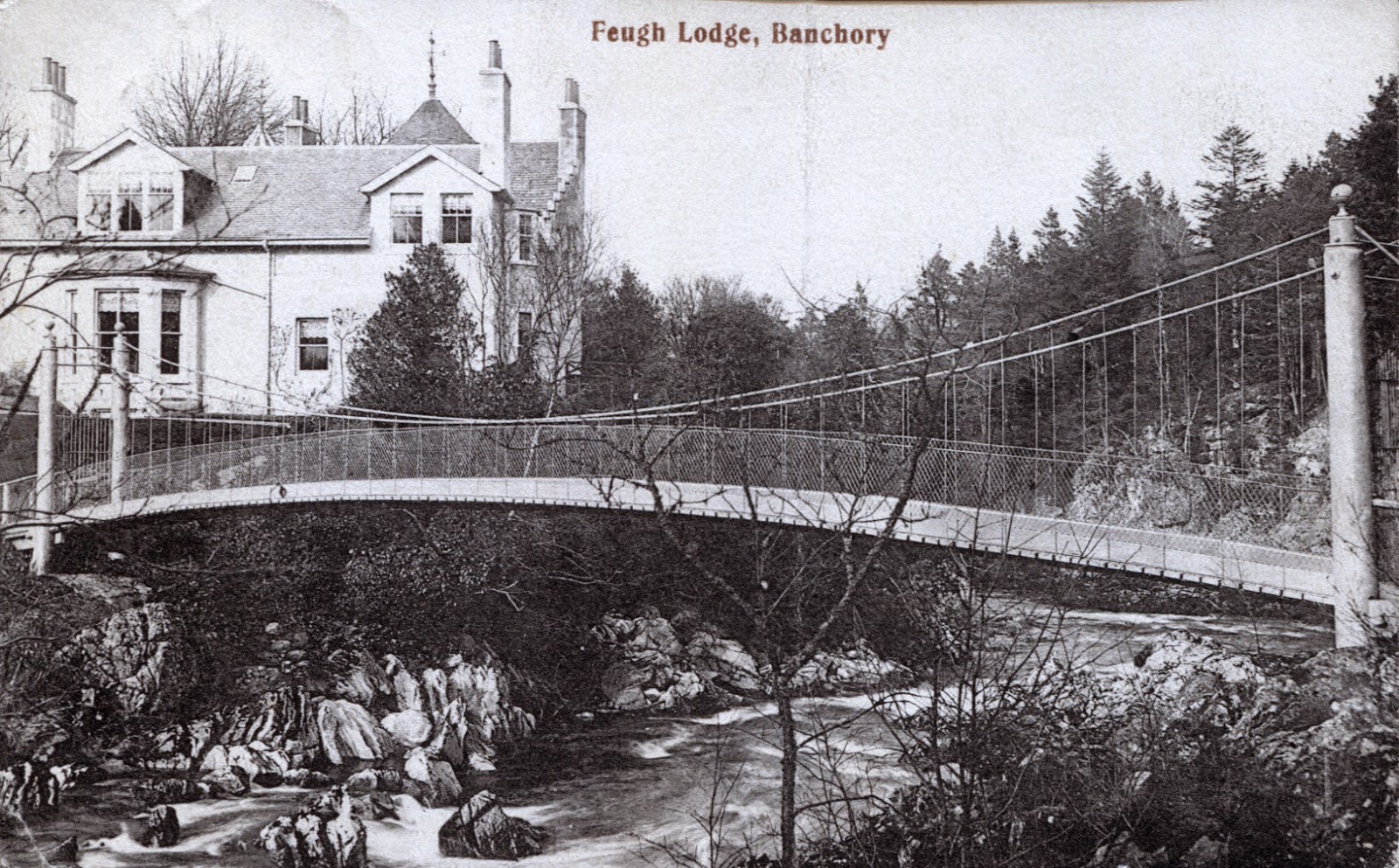 The house is still standing - and looking very ritzy, thank you very much: This view is from the opposite side of the house - you can just see the peak of the pointed roof beside the chimney in the other picture.  The satellite image shows this house being in the same location beside the bridge, and having the same roofline: 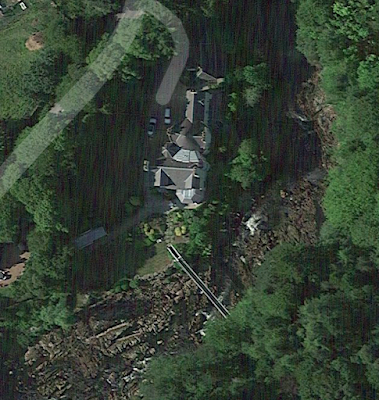 So that's it - Nellie was a kitchenmaid (something much more meaningful to me after watching Downton Abbey), in a relatively small upper class house, until she and Jack could make enough money to be able to marry and start a family.