Not all of the post cards in this collection are photographs of places.  This one is rather a love note - at least with the words on the front - the written note is not at all indicative of a woman who, three years later would leave her life and family and travel to another continent to marry this man. 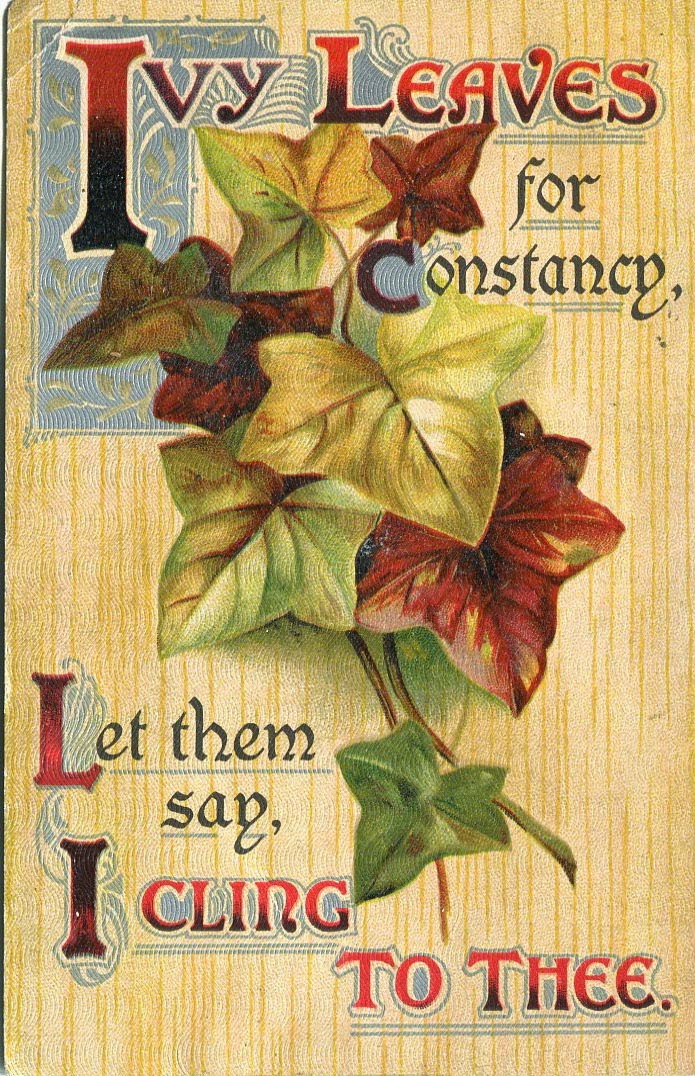 Written on November 12, 1909 the postcard is postmarked November 13 from Macduff to Jack in Nairn.  For those of you not familiar with Scottish geography, Macduff is located directly to the east of Banff: 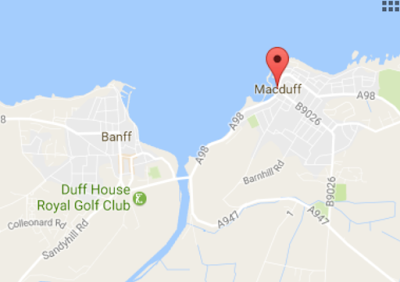 On the back it reads: "Backhill Bruntyards 12/11/09 DJ I am just here for the week end but I am not getting very fine weather not at all good for footballers NS".  (Jack was big into soccer). 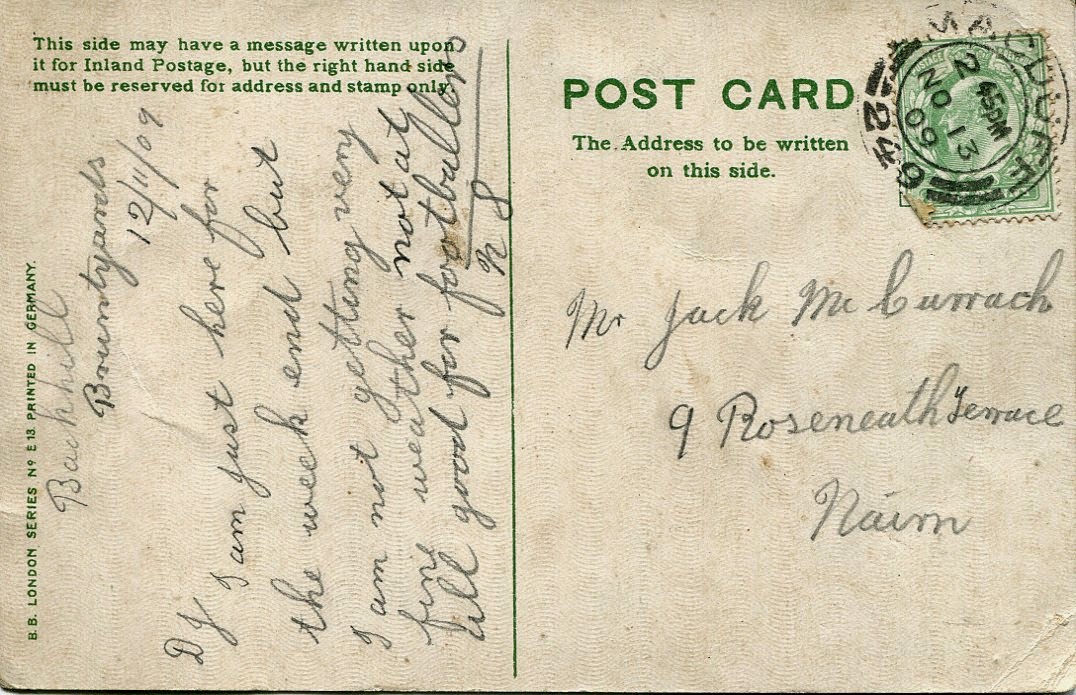 "Backhill Bruntyards" - this was, at this time, the home of Nellie's parents.  When he passed away in 1939, Mr. Alexander Milne Steele had been living at Ivy Cottage, Backhill of Bruntyards - he was 84.  He had moved to the small cottage after an accident left him unable to blacksmith any longer.  In 1939, the obituary stated that he had been living here for "over 30 years," implying they had moved there prior to 1909.

Before then, the Steele clan had lived for a couple of generations at Blairshinnoch.  Scotland's Places lists Blairshinnoch as "term pending" - meaning there is no definition on whether it was a farm, croft, etc.  However, in the 1861 census, the owner, Alexander Milne, is listed as a farmer of 260 acres; this is the main farm house he most likely built (but definitely lived in). 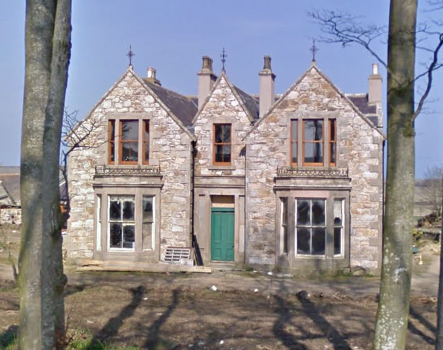 It's a beautiful stone building.  The age is unknown, but the upper story windows have recently been replaced.

My Great-Great-Grandfather (Alexander Milne Steele - named after the his father's employer) inherited the blacksmith job from his father and lived in slightly more modest accommodations: 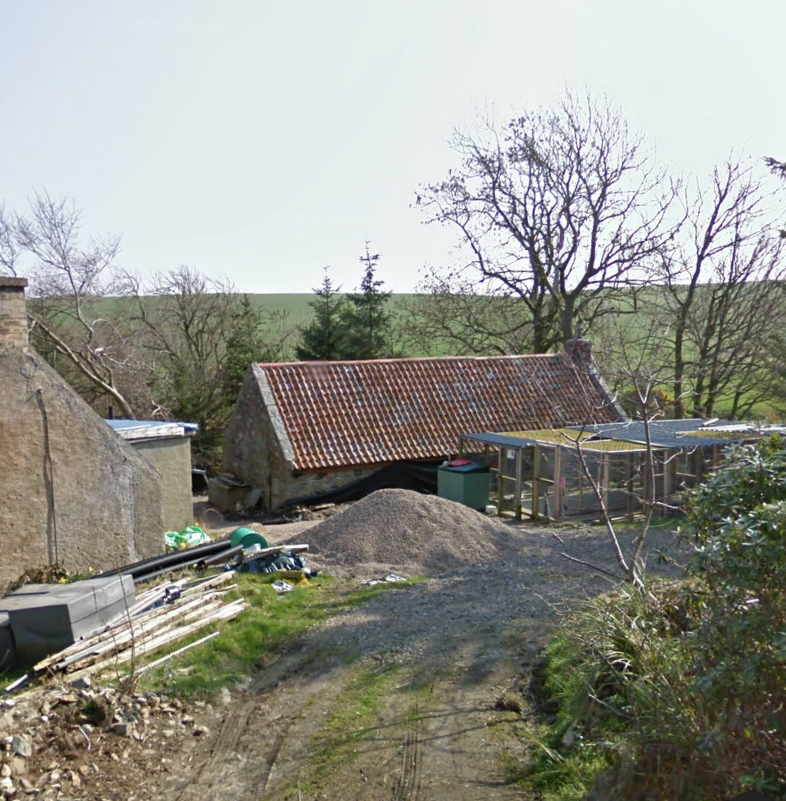 This small, one-storey shack with a loft was where Alexander and Helen Steele raised their 8 children.  I was lucky enough to visit when I was 17 in 1986.  I took a picture back then when some relatives took me to see it: 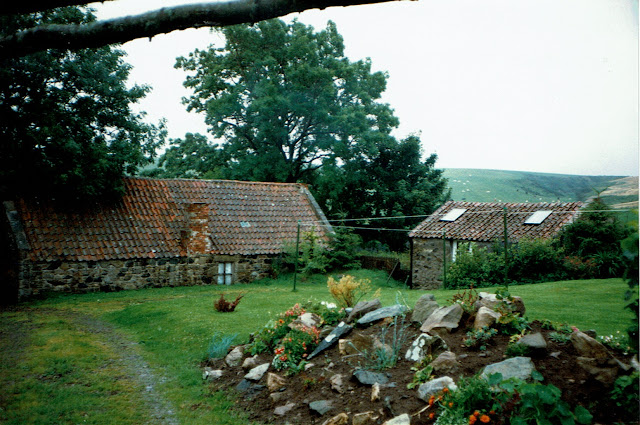 A lot has changed about his building since 1986.  The chimney has been moved, and it looks like the building may have been shortened on the right hand side.  So I had to take a closer look.  When you compare the stones on the left side of the building, you can see they are the same:

The blacksmith shop, located to the left in the pictures above, was more commodious than the house.  Here it is in full view with the little house to the left: 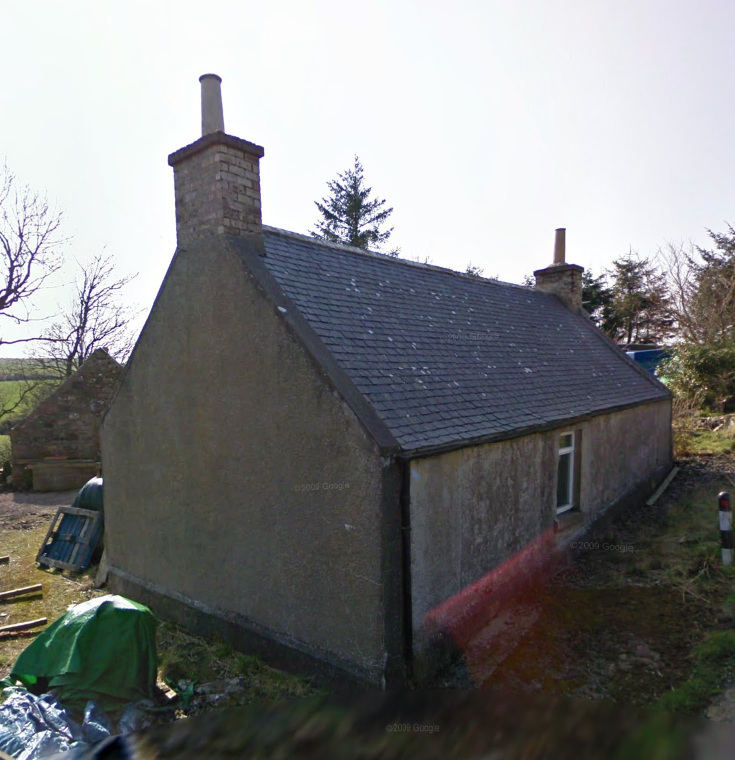 (Thank you Google Street View - what a wonderful research tool) 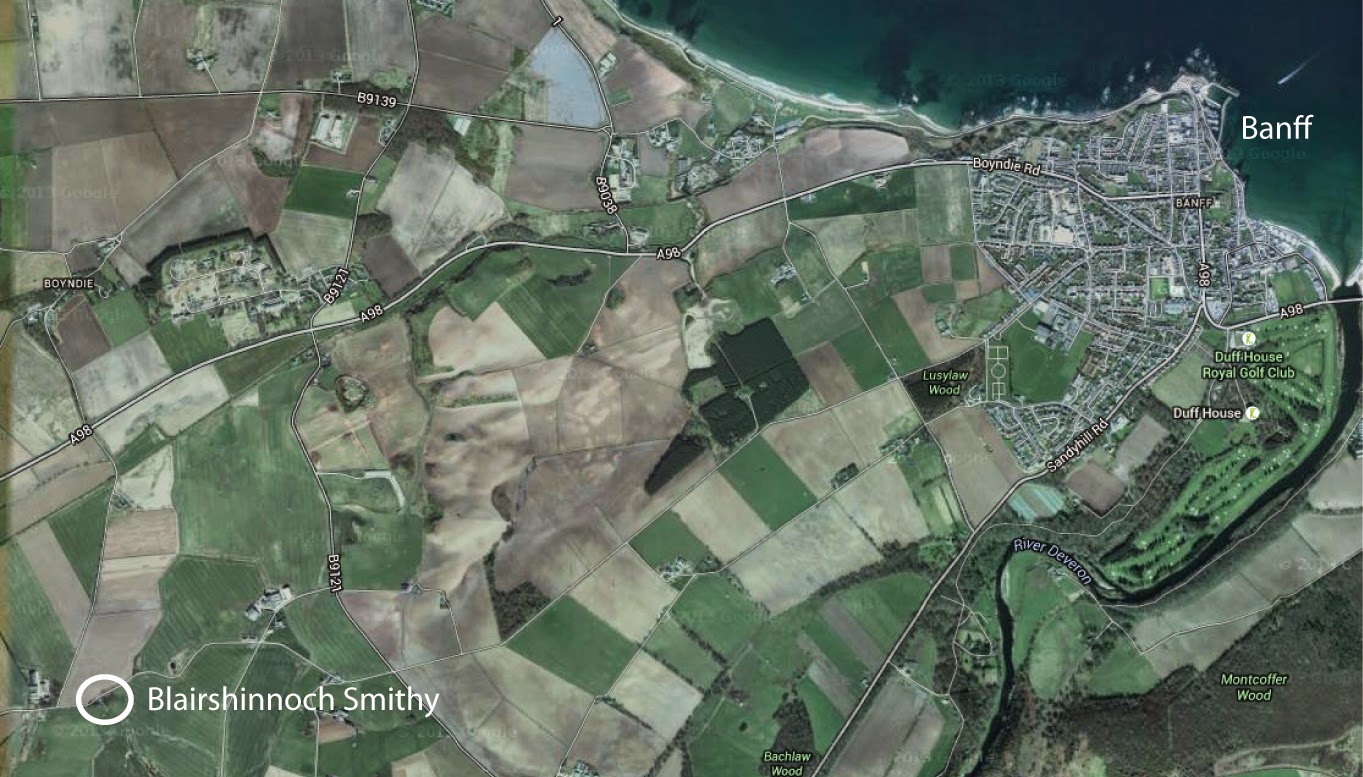 Here's the family with Alexander Steele being middle rear (obviously), and Helen beside him to the left.  Nellie, as you can see, is bottom right.  My Great-Grandmother.  I can imagine that this picture was taken against the wall of the smithy that we see above (although I cannot prove it). 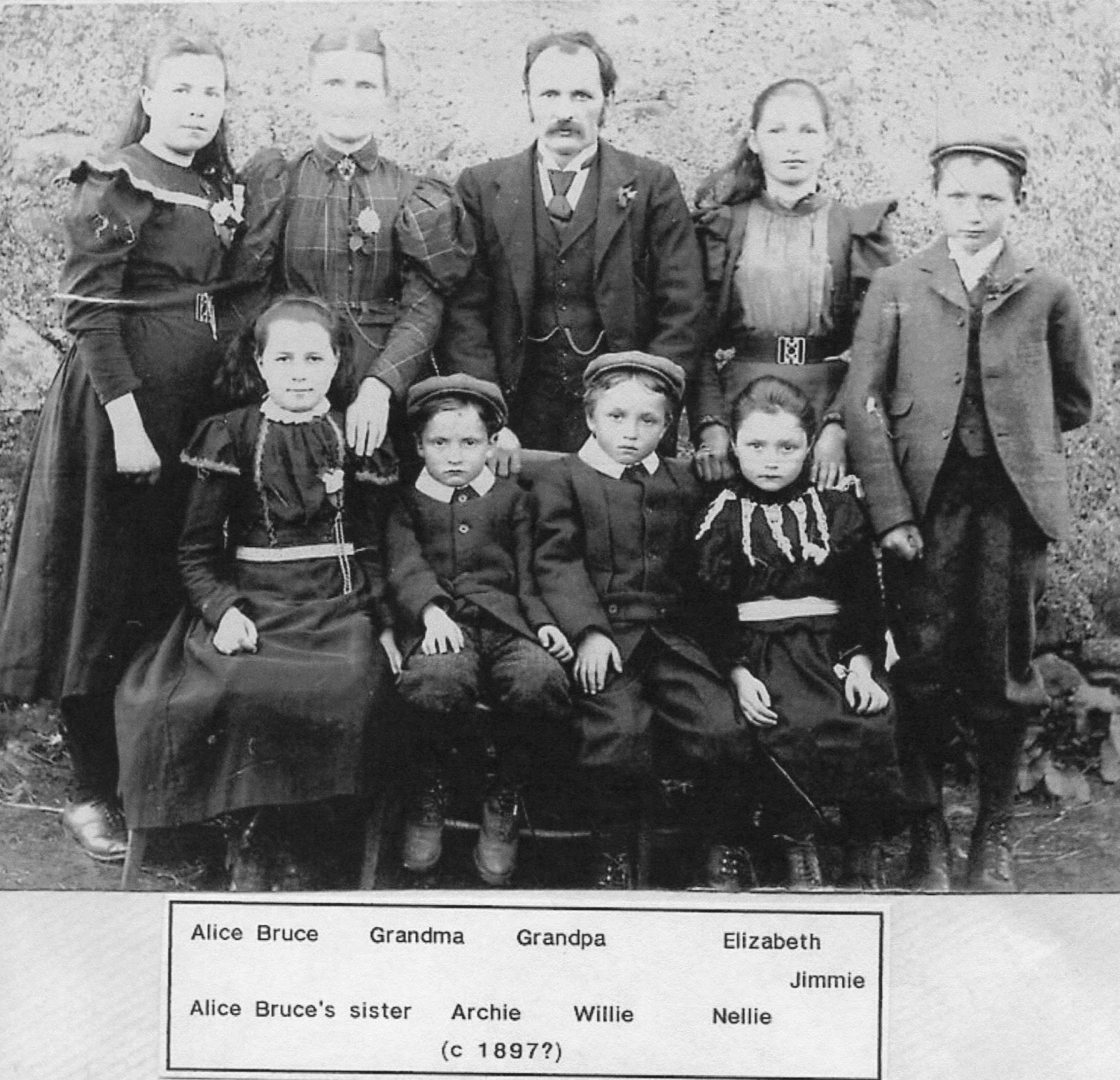 And here is a map of Blairshinnoch back in "the day":

Why the move from a lucrative blacksmith where "Mr. Steele was one of the best known blacksmiths in these parts" to a small cottage on another landowners farm?  At some point prior to 1909 (and seemingly after 1897 - the photo above), Alexander Steele had been out shooting crows and the barrel of his gun burst.  He ended up losing his left thumb, which ended his career as a blacksmith.  So he took the holding of Backhill of Bruntyards which he worked as a farmer until 1927 or so.

As you can see below, Backhill of Bruntyards (towards the bottom right with a blue pin in it) is located to the southeast of MacDuff and Banff. 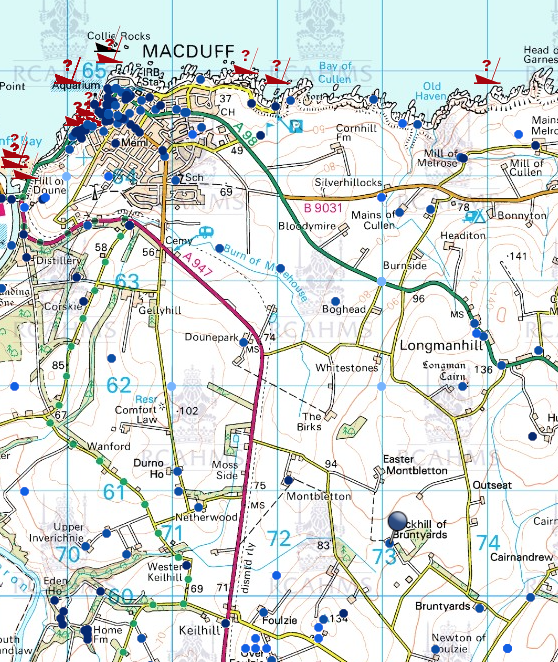 Here is a map of it historically: 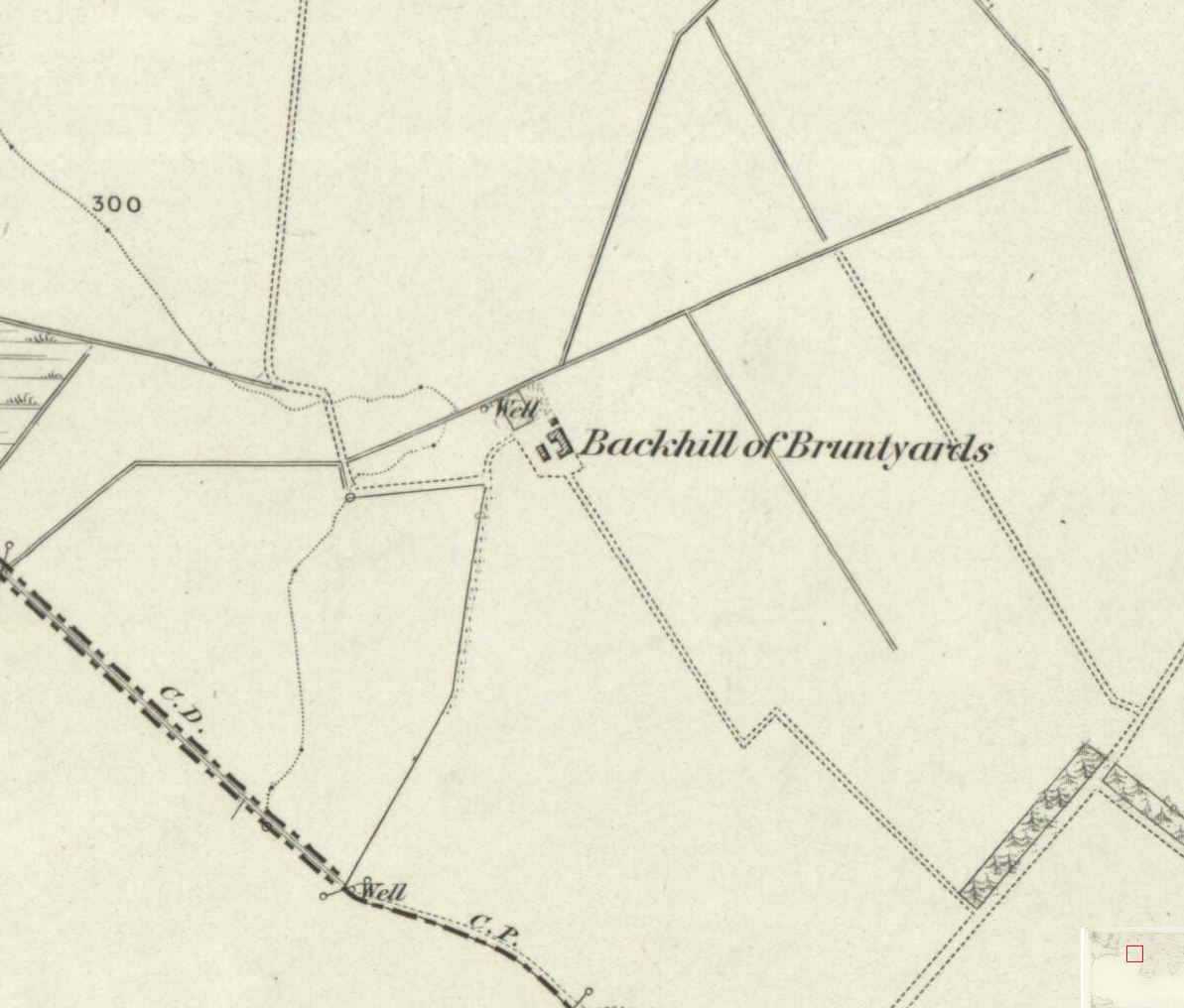 And here it is in relation to Bruntyards - which I assume was the main farm: 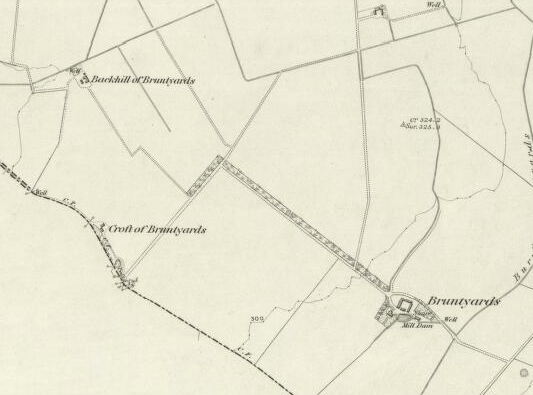 So there you have it - research led from a rather subdued love note to the locations of my Great-Great-Grandparents homes.