Today's postcard is one of the Duchess Of Hamilton steamer.  My great-grandfather's sister, Annie, sent this one back home to 9 Roseneath Terrace, Nairn to their sister Bella.  At the time, Annie would have been around 16 years old, Bella about 19.

The written text reads:  "Dear sister  having a lovely day this is the boat but we have not the rough weather that you see here do you wish you was with us annie"  Good thing their weather was better! 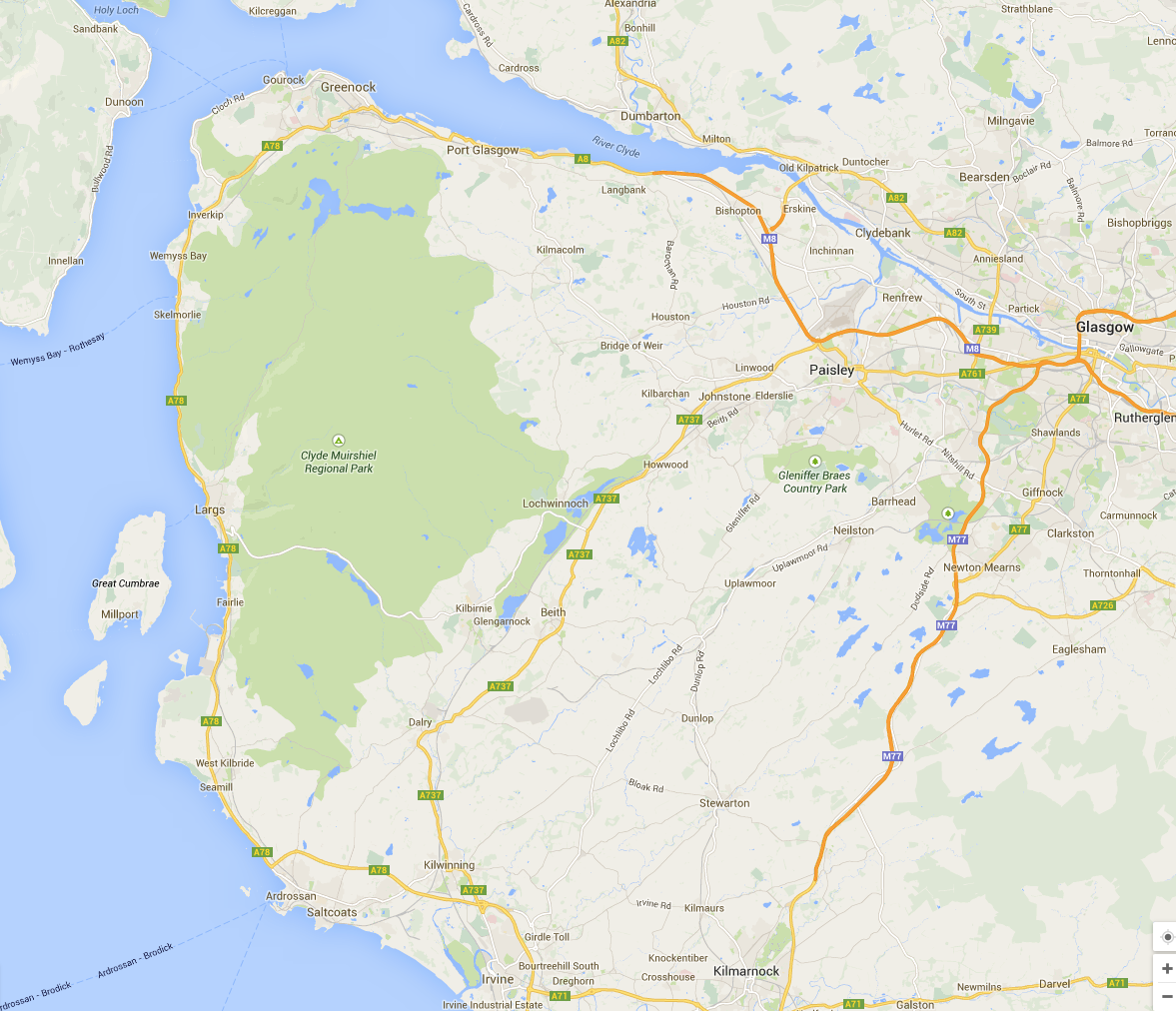 Gourock is located to the top left of the map on the south side of the river, near Greenock.  Ardrossan is to the lower left with the ferry lines coming form it.  As you can see, they are both relatively close to Glasgow. 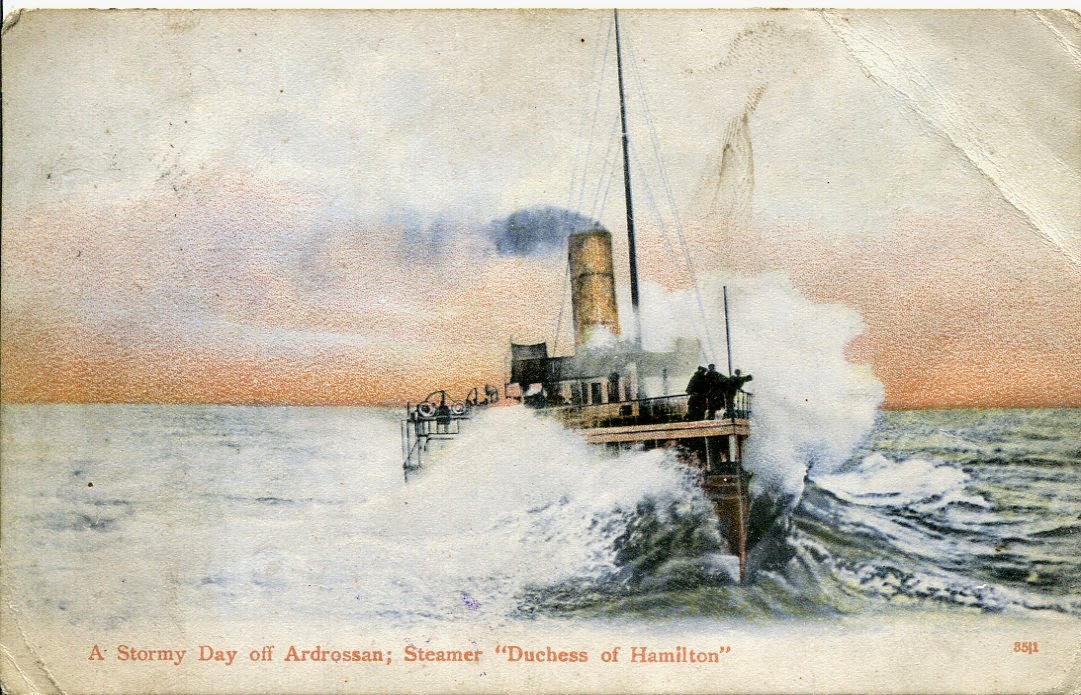 The Duchess of Hamilton was built in 1890 and served as a ferry before being put into service during WWI as a minesweeper.  She was sunk in 1915 by a mine from a German UC-3. 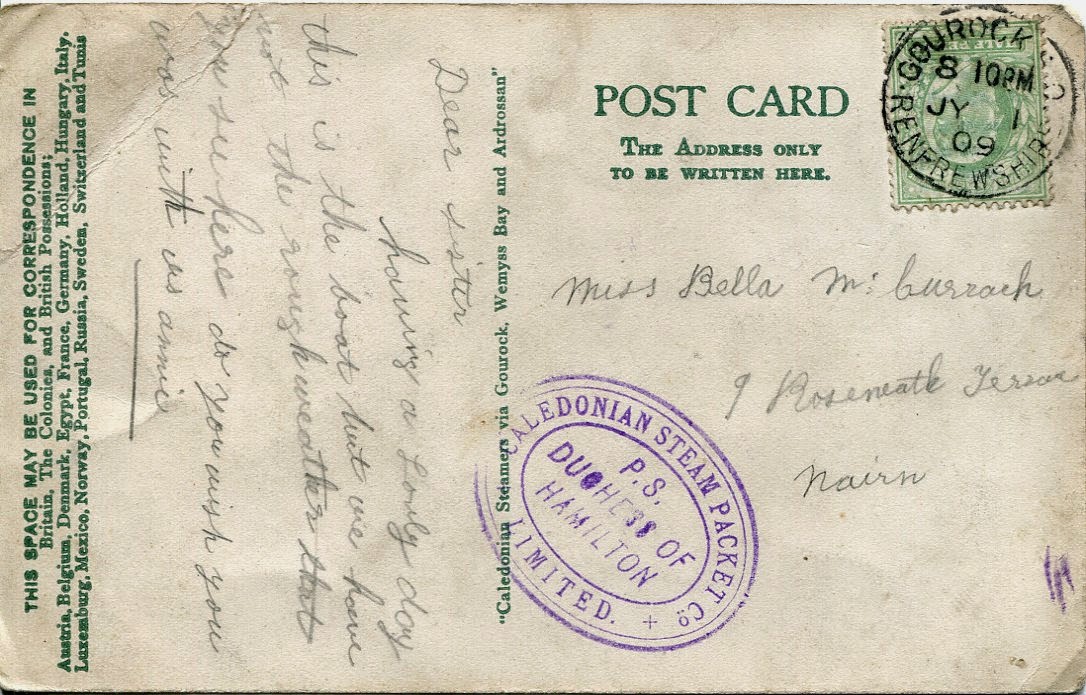 Gourock, like Nairn and other coastal towns, began as a small fishing village, and functioned as a seaside resort.  After trains offered faster, easier access to different cities, visiting the coast for a short visit was a possibility for more people.  I imagine that is why Annie was visiting Gourock at this time - either with family, or (more likely) with a family she worked for.  On the 1911 census, she is listed as a laundress and domestic servant, and she was likely doing that job by 1909 (14 was when most children left school to join the work force).

In Gourock today, you can stay at the Castle Levan which has been restored and is in use as a Bed and Breakfast.  It's not cheap, but what an experience to sleep in a 1457 castle! 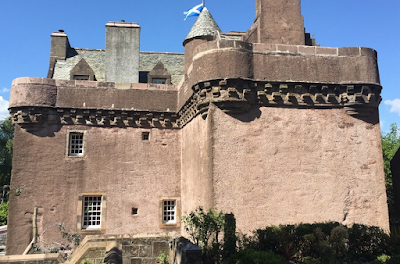 If you wanted to see all the places this ferry went, you could also visit Ardrossan - further south on the open coast, Ardrossan was a good location for shipyards, transportation, and exporting.  During the Industrial Revolution, exports of coal and pig iron to North America and Europe where a mainstay.  The shipyard provided fishing vessels and small cargo boats, and passenger service to the Isle of Arran, the Isle of Man and to Belfast were all implemented in the 1800s.  Ardrossan, in 1921, was also the first European site to receive radio signals form North America (source).

Interesting notes - there is an Ardrossan here in Alberta - however, the word means "headland of the little promontory" and Alberta's Ardrossan is completely landlocked.  It was, indeed, named after Scotland's Ardrossan.

Also, we are having a very large tree removed from our backyard today (2014?) (more to come on that) and one of the fellows working on it is Scottish - quite likely from near this area - spent time in Glasgow, anyhow.  Is it just me, or does everyone love a Scottish accent?   Maybe it's my genes - or the fact that my great-grandmother had a Scottish accent that I remember from when I was very small.