Addressed to Mr. J. McCurrach (Jack) of 9 Roseneath Terrace, Nairn, this postcard is of the church in the town of Monte on the island of Madeira, but the postmark is from Burghead, Scotland.  I don't know if this person went to Madeira themselves, or if they got it somewhere else.  My suspicion is that the postoffice or store in Burghead sold a varied collection of postcards from various places.

The text written on the front of the postcard reads: "Dear J.  We were sorry we did not see you before we left Nairn the last day we were there.  I am so busy just now that I forgot it was my turn to send a post-card.  What miserable weather.  Sarah"

When I initially wrote this post, I did not know who Sarah was.  But from other postcards, I did find out.  Read more here.

From what Sarah wrote, it would seem that Jack (as well as his mother and other members of the family) was caught up in the craze of the day:  postcard writing.  Postcards offered an inexpensive way to communicate.  These were public messages, so personal details are rarely included on a postcard, but lots of other information can be gleaned, as you'll see if you read more of the posts on this blog (they are meant to be read in order starting from #1)

Obviously there were many more postcards from Sarah that no longer are in the collection.  I wonder how many went missing over the years.  And I'm so grateful that my great-grandparents and my grandmother held on to these ones.

Madeira, for those of you who don't know, is an island owned by Portugal, but it's actually closer to Africa - southeast of the Azores and about 400 km north of the Canary Islands.  The islands of Madeira, Porto Santo, Deseratas, and the Savage Islands, form an administrative autonomy that is part of the European Union.  Madeira was claimed by Portugal early in the 15th century and is considered the first territorial "discovery" in the Age of Discovery. (source)

The small village of Monte is located on the island of Madeira, and the Church of Nossa Sinhora Do Monte ("Our Lady of the Mountain" - the building pictured on the postcard) is a major tourist attraction. Built on the foundations of an old chapel, the church was constructed in 1741 and damaged by an earthquake in 1748. The island became and continues to be a destination for tourists with 1.4 million people currently visiting each year. But was Sarah one of them? I hope so.  Just because travelling is a wonderful thing to do. But I do doubt it. From what I've learned about Sarah, and simply because of her association with Jack (implying similar social status), I don't think she would have had the money to travel. 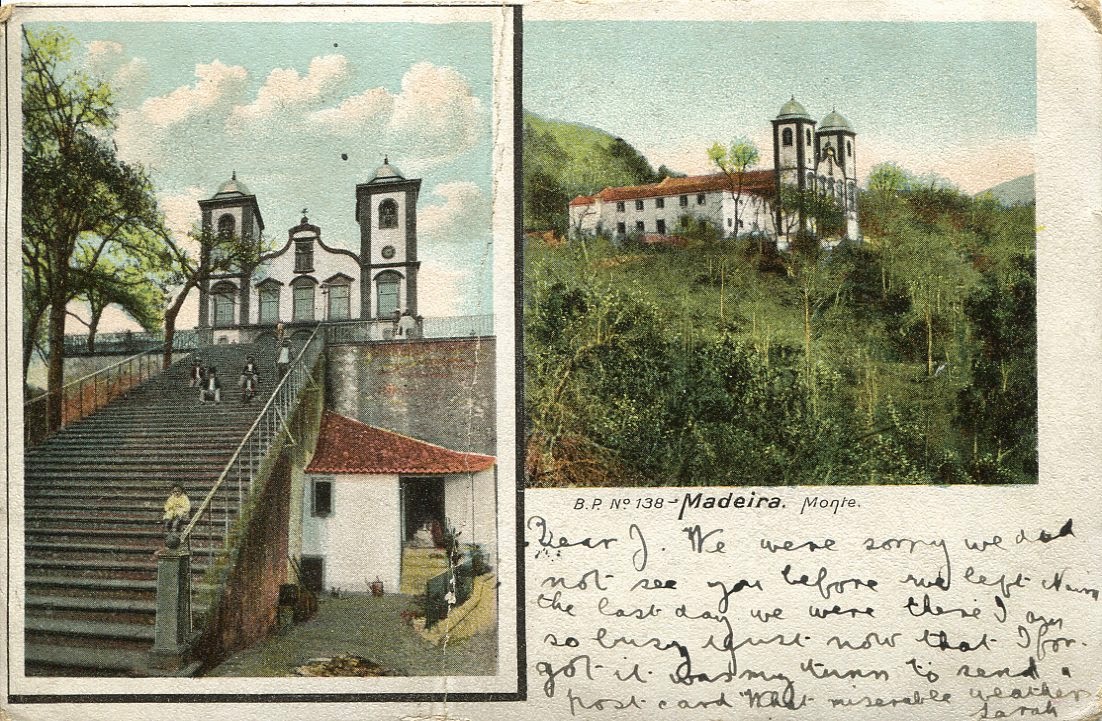 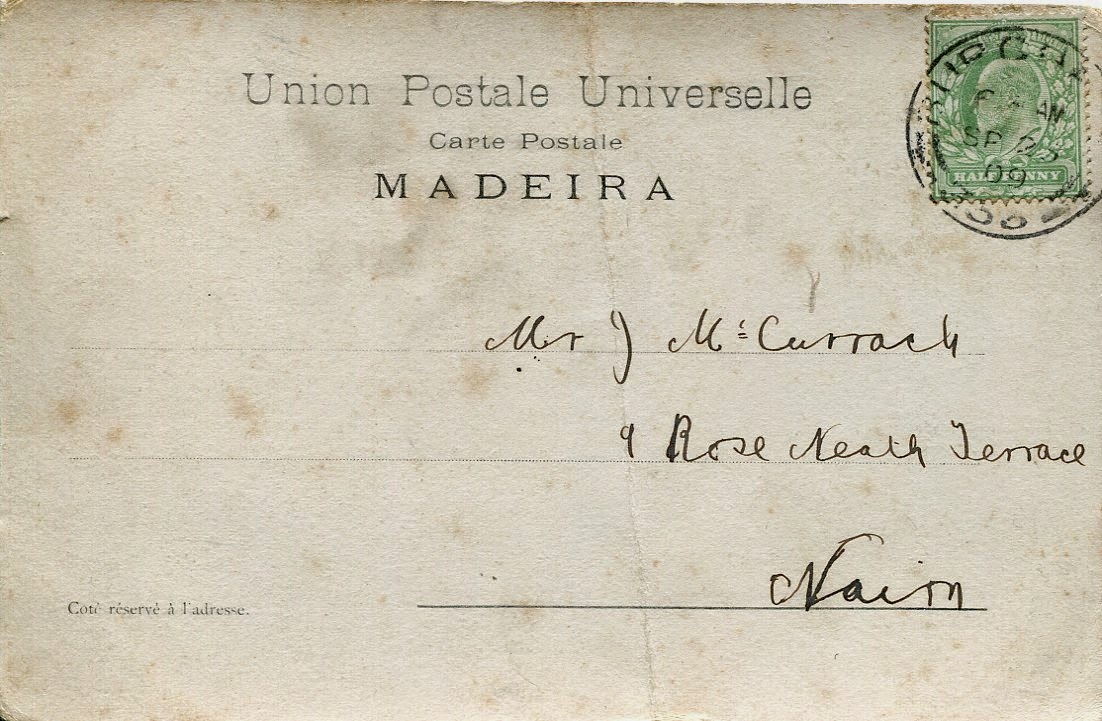 Burghead, where the card was postmarked, is a small town in the northeast of Scotland about 13 km north-west of Elgin.  In the process of building the town between 1804 and 1809, the remains of the largest known Pictish fort of its kind were partially destroyed.  The fort itself was destroyed during the Viking age and then nearly obliterated in the 19th century, but today, an active archaeology program is enlightening us about the earlier history of the area.