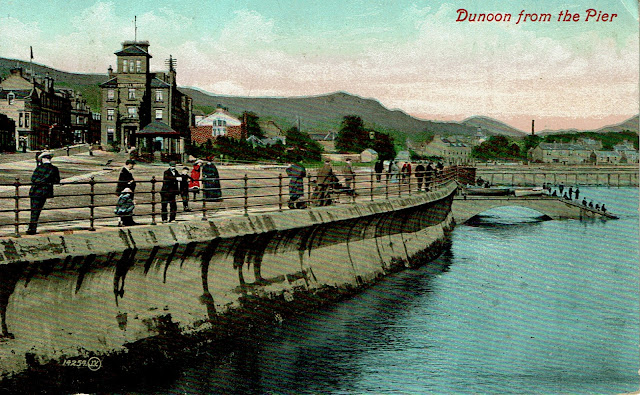 This postcard was sent from Annie McCurrach (my great-grandfather's sister) in Dunoon to her mother, Susanna at 9 Roseneath Terrace in Nairn, on August 7, 1909.

Dunoon, population around 4500, is located in the western portion of Scotland, west and north of Glasgow, across the water from Gourock, which was mentioned in this previous post.  It is the main resort on the Cowal Peninsula in the Argyll & The Isles region in western Scotland. 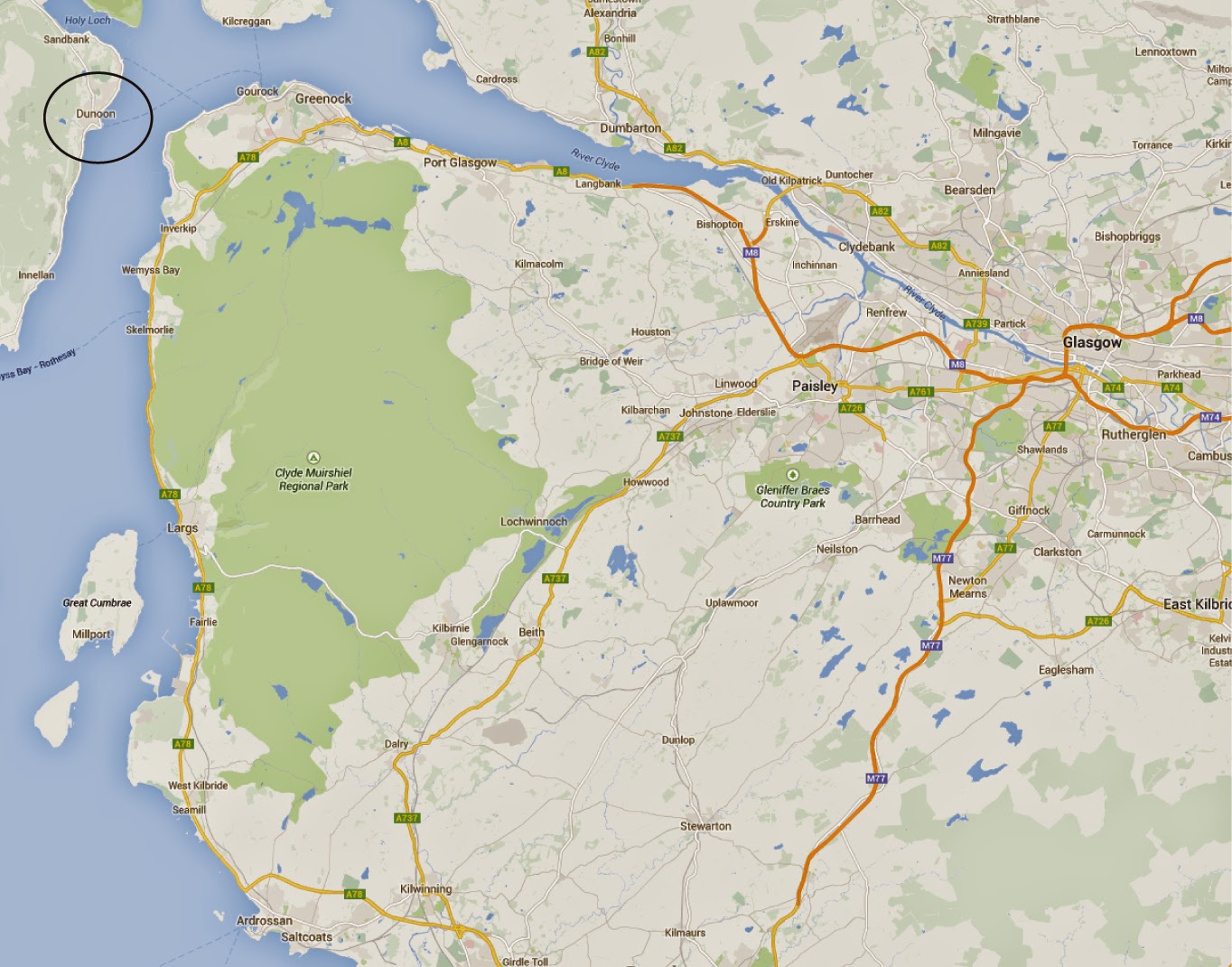 Dunoon Castle (because there's always a castle), the remains of which stand just behind and to the left of the photographer, was built in the 12th century and first recorded in the 13th.  It may have been built due to the Stewart's increasing influence in the area.  Surrendered to the English in 1333, an insurrection ensued and the Scots retook it.  By the 1400s, it was a royal castle and the Campbells were its hereditary keepers.

In 1544, the castle was captured by Matthew Stewart with military support from Henry the VIII, at which time Archibald Campbell, 4th Earl of Argyll, was driven out.  A violent feud between the Campbell and Lamont clans led to the Dunoon Massacre in 1646.  After the restoration, Dunoon was the residence of the the bishops of Argyll for a time.  in 1685, the castle was destroyed during the Earl of Argyll's rebellion against James VII and II (Wikipedia). 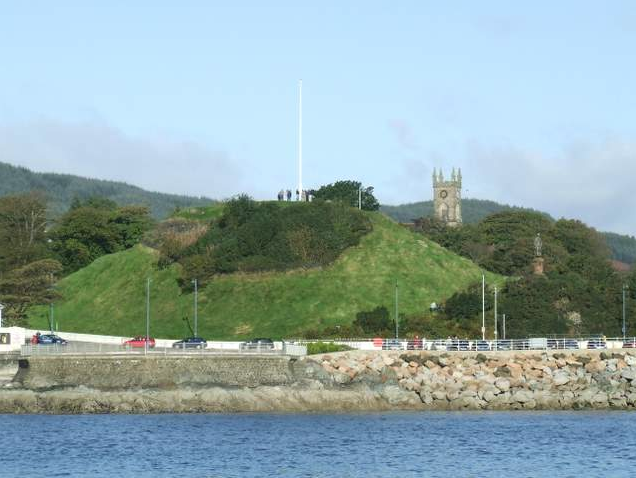 The castle hill in Dunoon

Dunoon remained a small village made up of mostly traditional Highland cottages until the early nineteenth century when steamers started to bring more people here.  The pier from which the postcard photo was taken was built in 1835 and is still there.  The town became a popular place for vacationers from Glasgow.  It has always been a defensive position for Scotland and I'm sure will continue to be so.  The Castle House Museum is one of the destinations for a history traveller.

Annie McCurach was on one of those holidays with her employers - she was a domestic servant, as you'll read below.

The text of the postcard reads:  "Dear mother will you kindly tell me how you streach your shawels do you wash them or just damp them my lady is doing one and is wanting to no how to streach it.  we are having fouly weather here but to hot for working at least for fat people like me ta ta with love annie write soon." 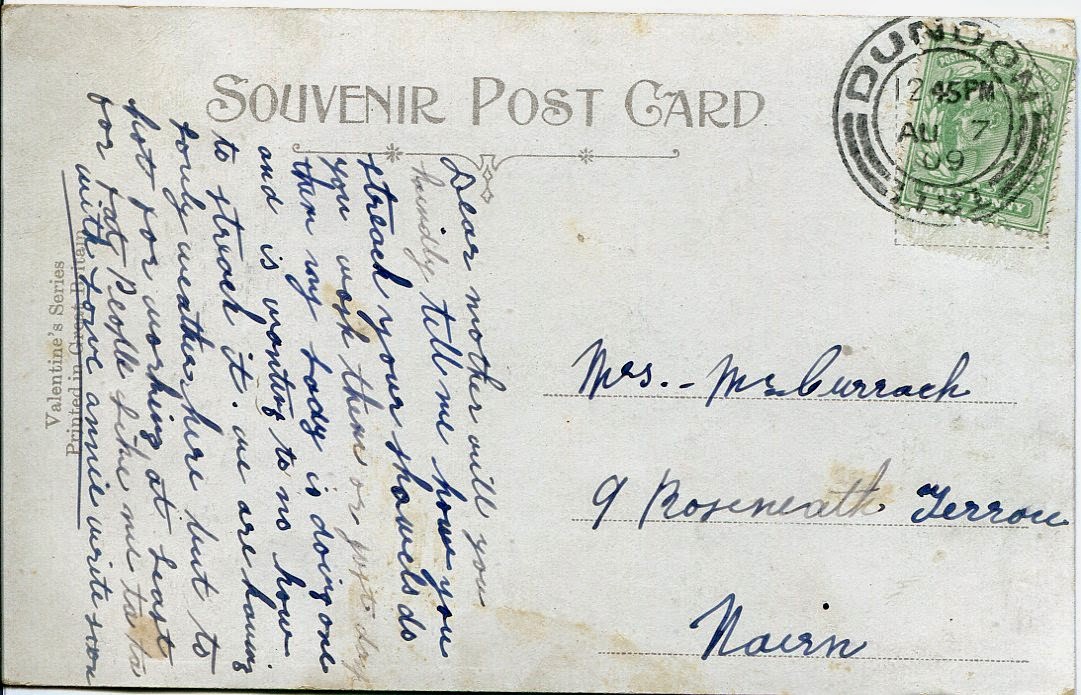 A couple of conclusions come to mind - Annie had poor writing skills despite a good education system in Scotland, and she was what she considered fat.  I'm not sure what the standards were for that in her day in Scotland, though, and I have no photos of her, so I have no idea if she was truly overweight or just thought herself such.

I have recently started knitting, and now understand how important it is to properly block a piece after completing it.  Which leads me to be so grateful for the Internet.  I learned basic stitches when I was young, but the Internet allows us to learn whatever we want without having to rely on relatives or friends to teach us.  Aren't we lucky?


The Argyll hotel seen in the postcard can be found on Google Earth today: 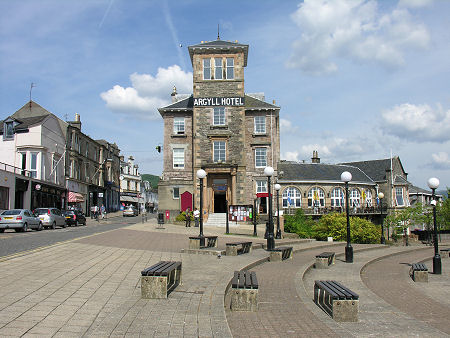 I want to go stay at this hotel - in that top room above the sign - if it's a room.  But I'd like to avoid the "fouly" weather.