Auld Lang Syne is a song we all sing (or at least hear) at the turn of the New Year.  The tune is rarely heard otherwise here in Canada, but when the first syllables are heard, memories of the ball dropping in New York, past house parties, and Frank Capra's "It's a Wonderful Life" flood into my head.  You would be hard pressed to find any adult in the commonwealth who does not know the tune - much like Happy Birthday.

"Auld Lang Syne" can be translated from Scots to English as "Old Long Since" - or, in the case of the song, as "for the sake of old times."  It started out a poem, written in 1788 by Robert Burns (Robbie to those who know him well 😁) and was set to the tune of a traditional Scottish song.

Burns lived a prolific but short life - 1759-1796 - and died when he was only 37.  Rumours abound about why he died so young, but a general consensus now seems to be that he died of bacterial endocarditis secondary to chronic rheumatic heart disease - probably because of having rheumatic fever as a child.  However, his lifestyle undoubtedly added to an earlier death.  He was quite a drinker (1) (he was an artist, and a Scot), and also a womanizer.  Weak heart, bacterial infection, unhealthy lifestyle ... it adds up.

Regarding children, the first known child of Burns' came from him impregnating his mother's servant, Elizabeth Paton (source).  Also named Elizabeth, the child lived with Burn's mother until Robert died in 1796 (source).  He, however, abandoned his mother's servant for a relationship with Jean Armour, his future wife, who became pregnant (with twins) in March, 1786.  Despite Burns declaring his marriage to Jean in writing, Jean's parents sent her away, and Burns himself lamented having abandoned the children in a letter written in 1786 addressed to Mr. Robert Aiken:  "... how should I meet the reproaches of those who stand to me in the dear relation of children, whom I deserted in the smiling innocency of helpless infancy?".  This feeling alone, the feelings of a father and his responsibility to his children, made him hesitate about going to Jamaica when it looked like his only option to make money and escape arrest under the hand of Jean's father (2).  A publication deal, the money from which made it possible for him to avoid arrest, allowed him to stay in his homeland and abandon plans to move to Jamaica to work on a sugar plantation.  He officially married and cohabited with Jean in 1788, though they had claimed marriage two years before.   She gave birth to a total of nine children, three of whom survived infancy (source).

Burns, regardless of his apparent social faux pas, was a beloved artist in Scotland.  He produced poetry in the Scots language which made it accessible to the general public.  He is widely considered the national poet of Scotland and is celebrated worldwide.  Every year on or near January 25, you can find a Burns supper somewhere to get your Scots on.

Burns lived his life in the southwest of Scotland (Alloway, Tarbolton, Mauchline, Dumfries), the last few years in Dumfries, the largest parish in Dumfriesshire in 1755 (with 4517 inhabitants - mostly Protestants) (source).  The numbers were likely very close to this 40 years later when he moved there.

This postcard is from Dumfries. 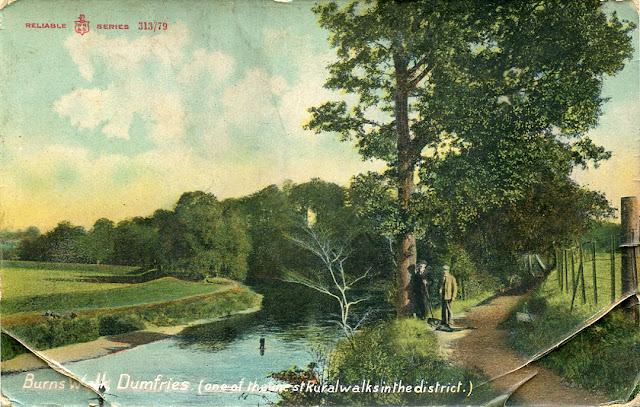 The front of this postcard reads:  "Burns Walk Dumfries (one of the fine rural walks in the district)."  Dumfries is located in the southwest of Scotland, about 75 miles south and slightly east of Glasgow.  The Burns Walk is along the river Nith and is still a recreational area (more information here).   The path is about 7.5 km and takes 2 to 2.5 hours.

An interesting side note, I have a copy of some The National Burns Vol.II - and it is at least 125 years old.  Here is the frontispiece: 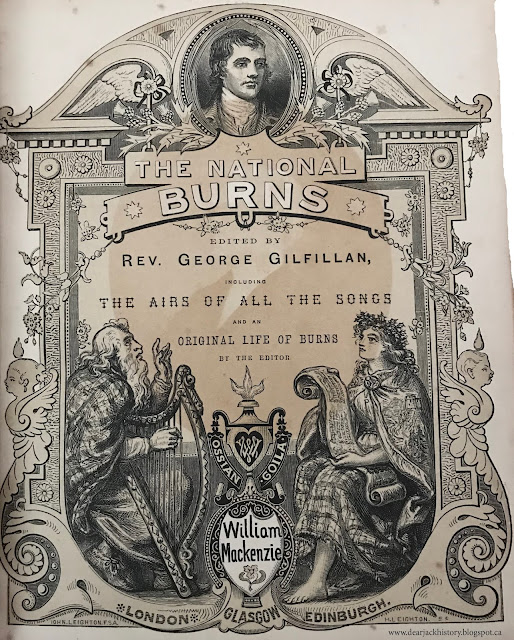 The Burns Walk postcard was sent to Belle McCurrach at 9 Roseneath Terrace in Nairn (where she lived with her mother, father, sister and two brothers).

Text is hard to read - but I'll do my best:  "Dearest Belle.  Have had a lovely time.  Sorry it is nearly all past  Shall be with __________ train tomorrow (dumfries? something). Shall tell you all news.  trust you are well and not lonely.  Love Ettie" (I believe it is Ettie because she is mentioned in another postcard as having joined the "Sally's" [the Salvation Army]).

As an update:  thanks to blog reader, Carole Hastings, we have a full translation:  "Dear Bell Have had a lovely time Sorry its nearly all past Shall be with 4.07 train tomorrow (Tempus fugit) Shall tell you all news Trust you are well and not lonely love Ettie."

"Tempus fugit" is a new phrase to me.  According to Wikipedia, it was first expressed in Virgil's Georgics (written in 29 BC) as "fugit irreparable tempus" - translated as "it escapes, irretrievable time" - I like it.  I might have to incorporate the term into my lexicon. 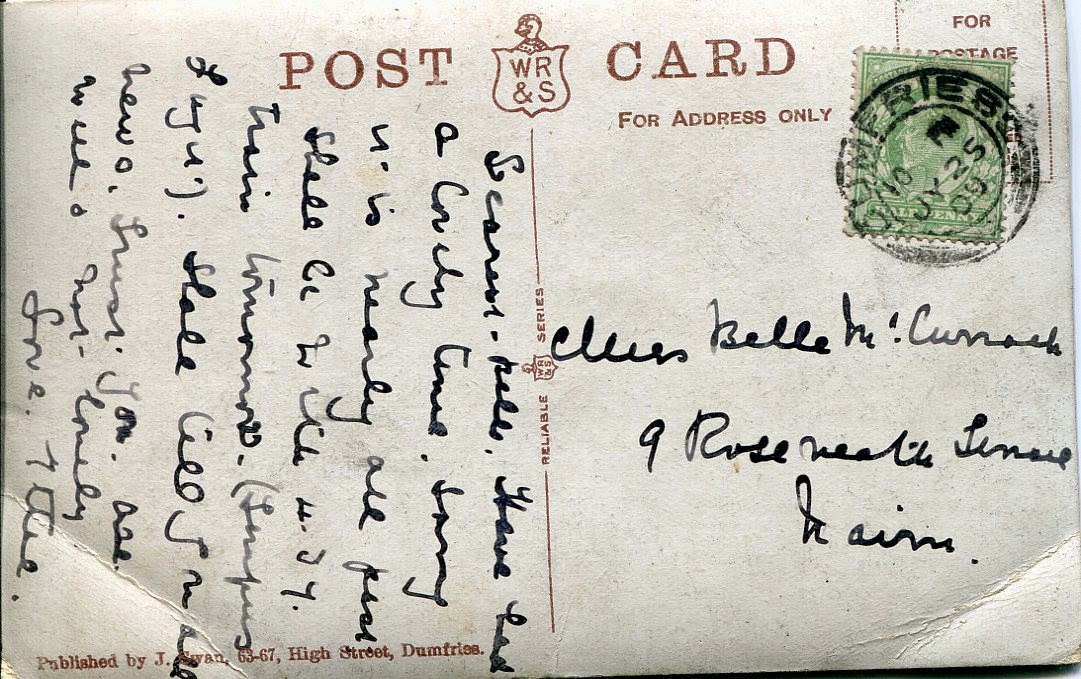 The postcard is published by J. Swan 63-67 High Street, Dumfries.  Thanks to the "Old Dumfries" group on Facebook, we have this wonderful ca. 1900 photograph showing J. Swan's storefront: 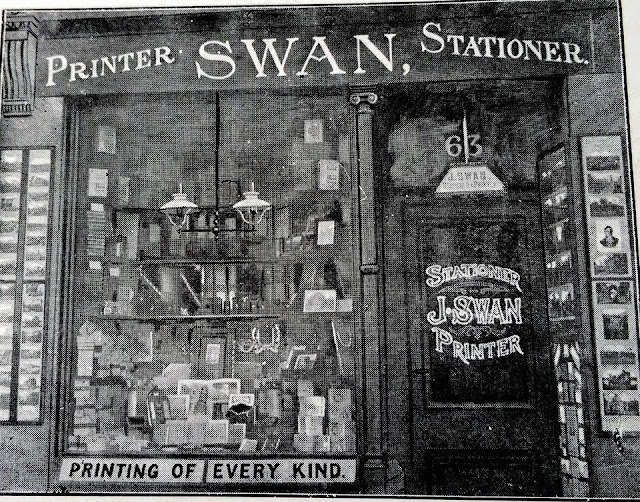 Here is where the store was located - there isn't a Google Streetview image of it, darn it: 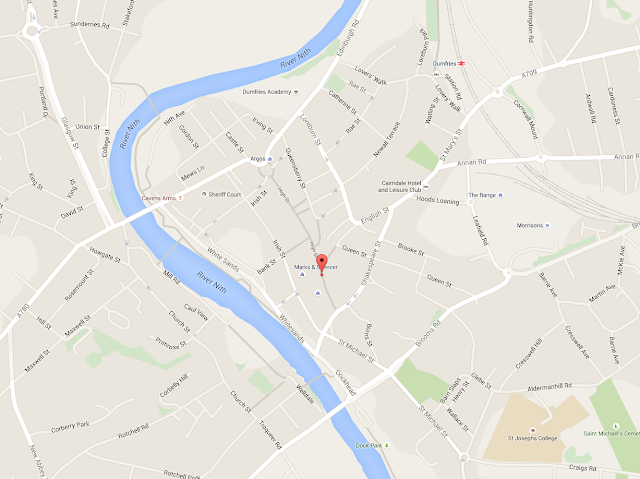 One of my favourite lines of Robbert Burns' was written early on in his career and has always impressed me, perhaps because a famous play was named after it.  From his poem "To a Mouse", the line reads:  "The best laid schemes o' Mice an' Men / Gang aft agley" or "the best laid plans of mice and men often go awry". Who can argue with that?