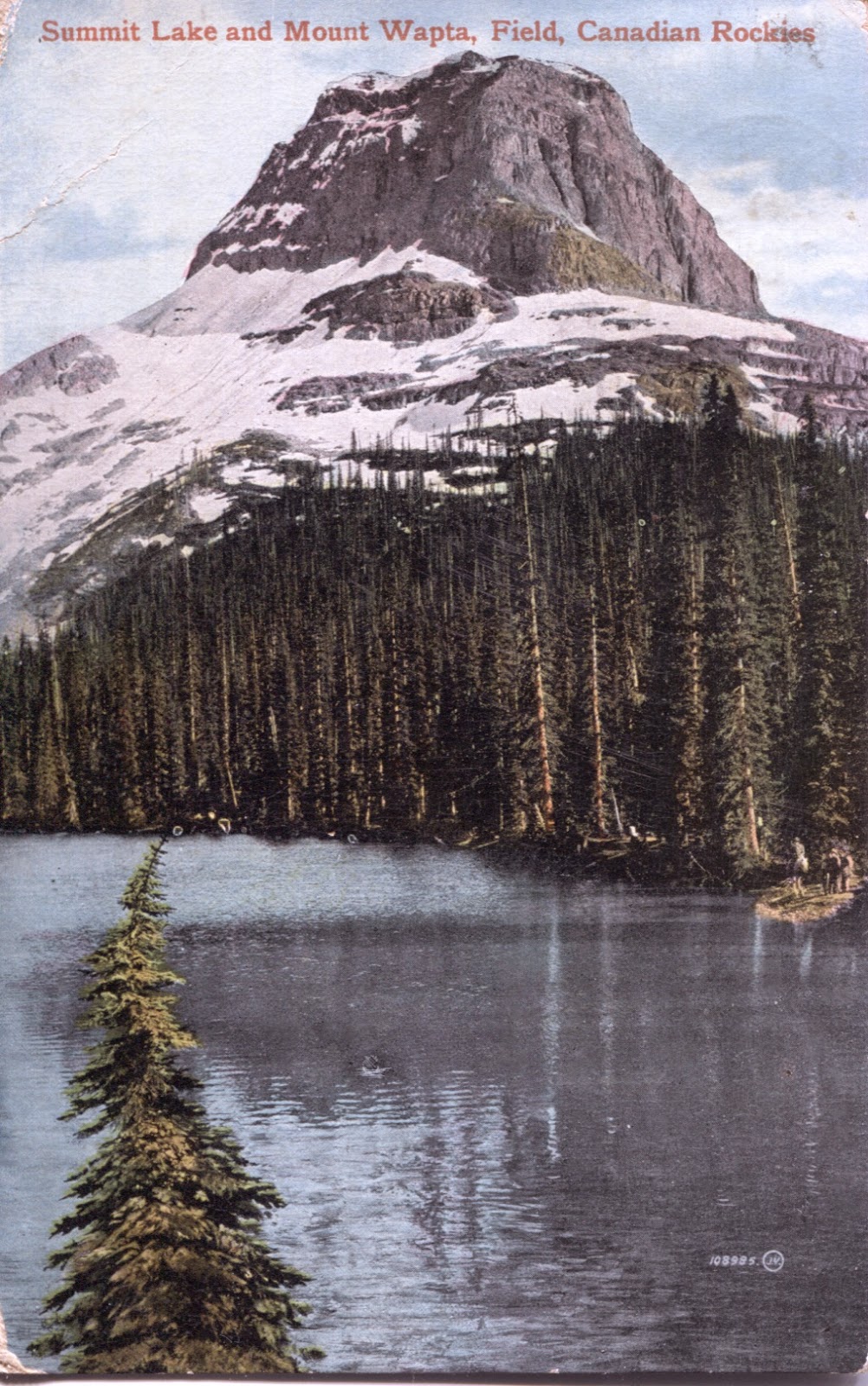 From what I can ascertain from Google and other people's photos online, these are now called Wapta Mountain (as opposed to Mount Wapta) and Yoho Lake (instead of Summit Lake), just north of Field.    This is a fabulous area and is in Yoho National Park part of our wonderful National Parks system in Canada. 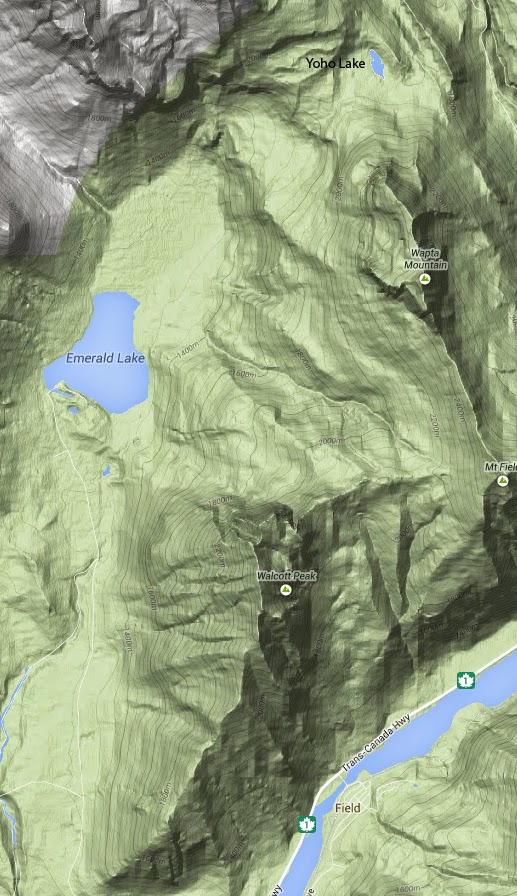 This postcard was written in a very light pen or pencil.  Parts of it are really not readable, but I'll do my best.  See if you can get more. 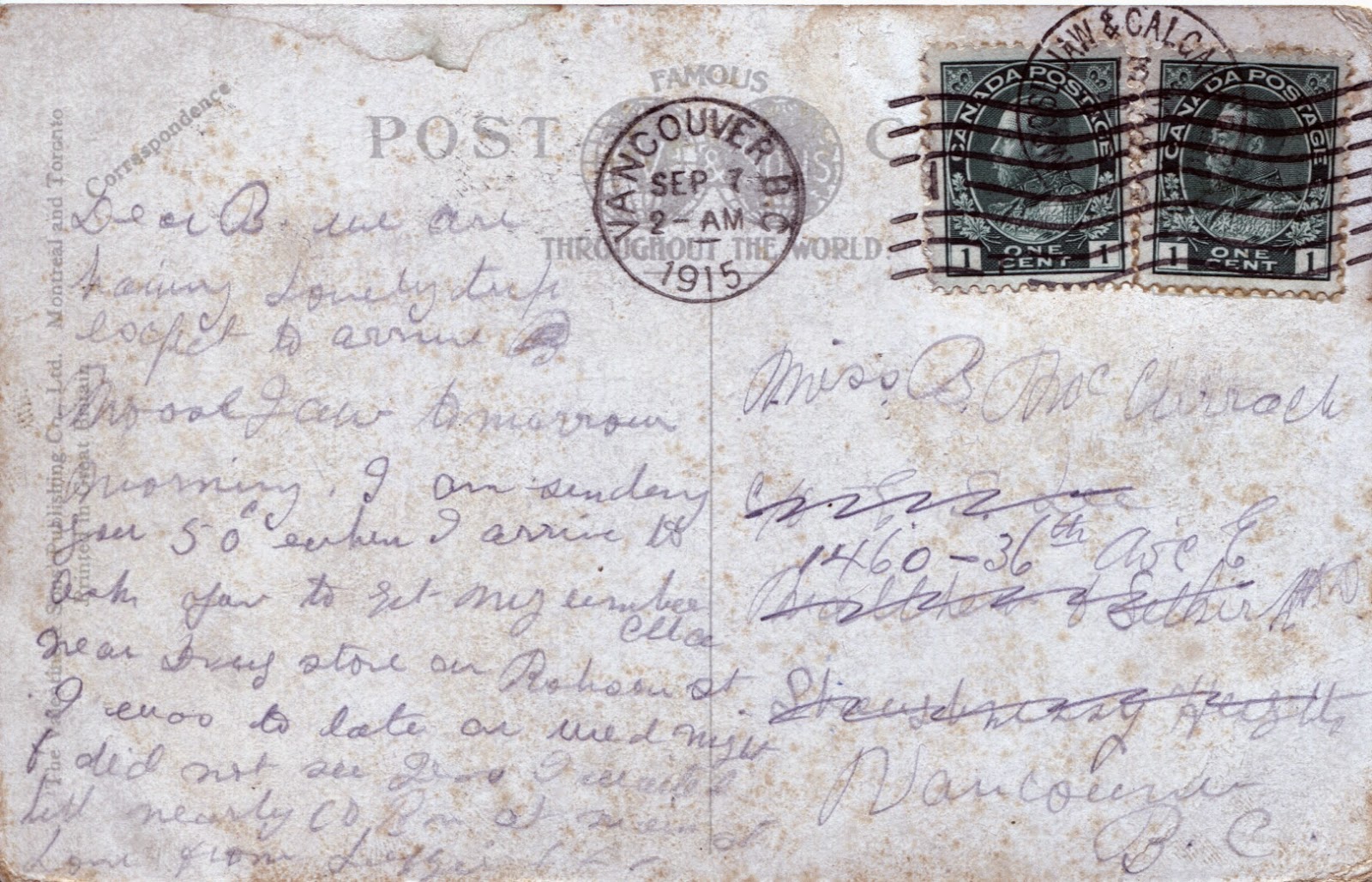 "Dear B. We are having lovely trip expect to arrive Moose Jaw tomorrow morning. I am sending you 50c when I arrive to as afar to get my umbrella near drug(?) store on Robson St. I was to late on Wed night I did not see ____(?) I waited til nearly ____(?) at main st. Love from Lizzie"

I don't know who this Lizzie is. There was a Lizzie Steele, but she lived in Scotland and died in 1912.  This is 3 years later. She may have been a friend. I wonder if she is going to Moose Jaw to visit the friends that wrote the previous postcard form there.

The letter was written to Bella in Vancouver - this was Jack's sister and indicates that she is indeed has moved to Vancouver to be with her brothers. She has the same address as Jack and Nellie although it was originally written care of someone who lived in Shaughnessy Heights.  I don't know who they would have known there as it was and is a very swanky neighbourhood.

The post mark is interesting. The one on the stamps reads Moose Jaw &amp; Calgary R.P.O. RPOs were Railway Post Offices, an important part of the Canadian Postal Service. According to this website:

"Mail began to be sorted on trains in the late 19th century when the railways had developed an extensive passenger network. The Railway Mail Service was the elite branch of the Post Office. It took intelligence, manual dexterity, strength, endurance and an excellent memory to qualify as a Railway Mail Clerk.

An annual event was the Case Examination in which the clerk had to sort 1000 cards with the Post Office name on them into the slot corresponding with their correct distribution point. The time limit was 1 hour and an accuracy rate of less than 90% meant no salary increase. Repeated failure led to dismissal.

View next postcard post.
Posted by Sandi Ratch at 4:00 PM