On August 30, 1910, someone named John sent Jack, in Vancouver, a postcard from Edinburgh.  The text reads:  "Thanks for the P.C. which I duly received.  Glad to hear you like your new surroundings, and hope you will soon get into their way of working in Vancouver.  I am spending a short holiday in Edinburgh with Dave, and am enjoying myself first-rate in spite of wet weather.  Write me a letter soon.  Kindest regards, John." 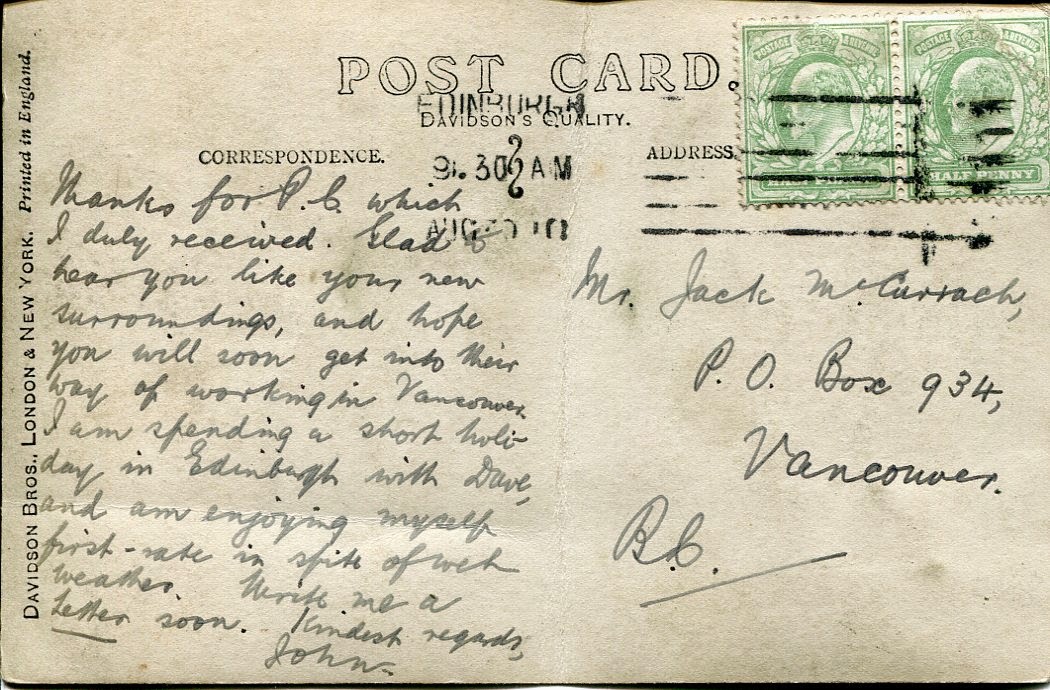 The comparatively excellent grammar, sentence structure, etc. in this postcard make me think that perhaps this man worked with Jack at some point.  Jack was a compositor - he set type for printing.  He was listed as a "printer" when he travelled to Canada, and had worked for the County Press, Nairn, for 8 years by that time.  I have found a reference to the St. Ninian Press and the Nairnshire Advertiser and County Press.  It was started by John Fraser as the St. Ninian Press in July, 1892 and changed names to the Nairn County Press and Advertiser on July 24, 1897.  The paper ceased production in July 1917.  Reference found here.

So I don't know if the signee, John, was his employer John Fraser, or if it was another John (although the grammar and penmanship certainly don't discount him).  And I do not have any idea who Dave may have been (and given their exceedingly common first names, I probably never will), but the text tells us something.  It indicates that there is some culture shock.  That Jack has expressed some concern about how he fits in and how people in Vancouver do things.  I suspect he might be finding it hard to get a job - and I say this because the Vancouver city directory of 1911 list both of Jack's brothers and their jobs, but not Jack - although we know he was there because he came with his younger brother.  Of course, he may have just been missed in the survey for the directory, because in the 1912 version, he is listed as working for G.A. Roedde (the owner of a printing company) and his brother, William, is missing.  Jack and his older brother, Alexander, are both living at 434 29th Avenue E in Vancouver at this time (near Fraser Avenue, which was mentioned in the last post).

The front of this postcard is of the Scott Memorial in Edinburgh: 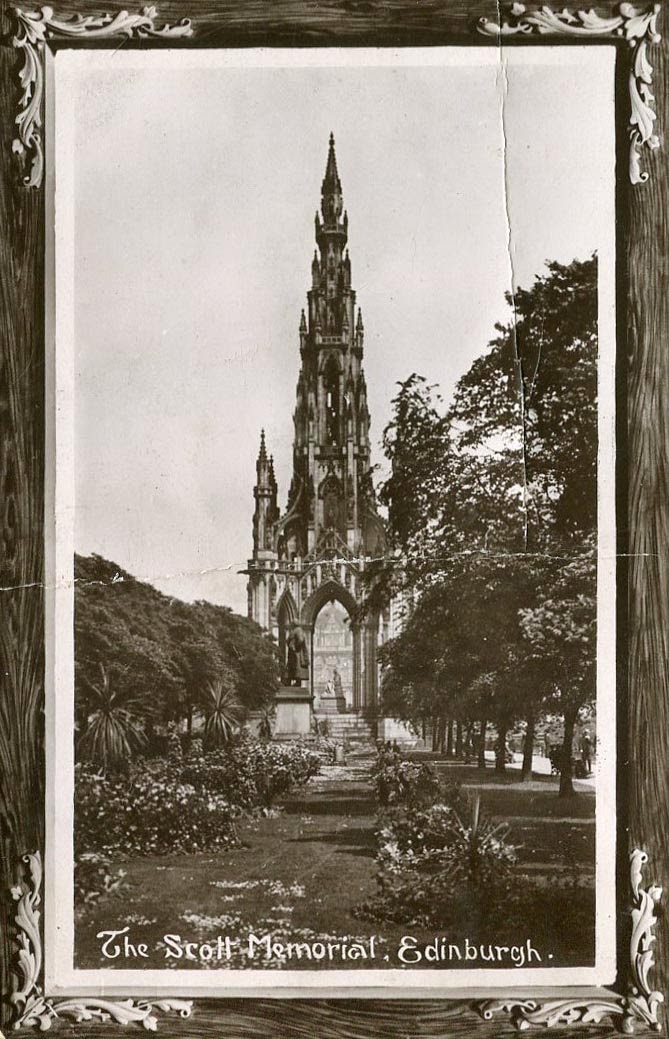 Now known as the Scott Monument, this edifice was erected in the memory of Sir Walter Scott, a famous 18th and 19th century author.  Okay, so most of you probably know who Sir Walter Scott is - I really didn't.  I knew the name.  In looking him up, I find out he was a pretty big deal.  He was the first English-language author to become internationally renowned within his lifetime.  He wrote Rob Roy and Ivanhoe (as well as a lot of other great works).  I'm fairly embarrassed, as the descendant of proud Scottish stock, to not really know who this man was.  I do know Robert Burns, though.

After Scott died in 1832, a competition was held to design a monument to him.  George Meikle Kemp won the honour of designing it.  The statue at the base of the monument was designed by Sire John Robert Steell (I wonder if there is a distant family relation to Nellie Steele).  The monument was completed in 1844.

At a total cost of 2.36 million pounds, the memorial was restored in the early 1990s.

I like the fact that there are palm tress in the picture.

View next postcard post.
Posted by Sandi Ratch at 4:47 PM