I think I filed this one out of order as it is sent to Jack in Nairn - seems it might have been February, 1910.  It was sent from Sarah in Burghead.  We've seen other postcards from her:  one sent from Burghead but a postcard showing Madeira, Portugal; one showing the colours of the Seaforth Highlanders; and one showing the Maclean Memoiral in Burghead. 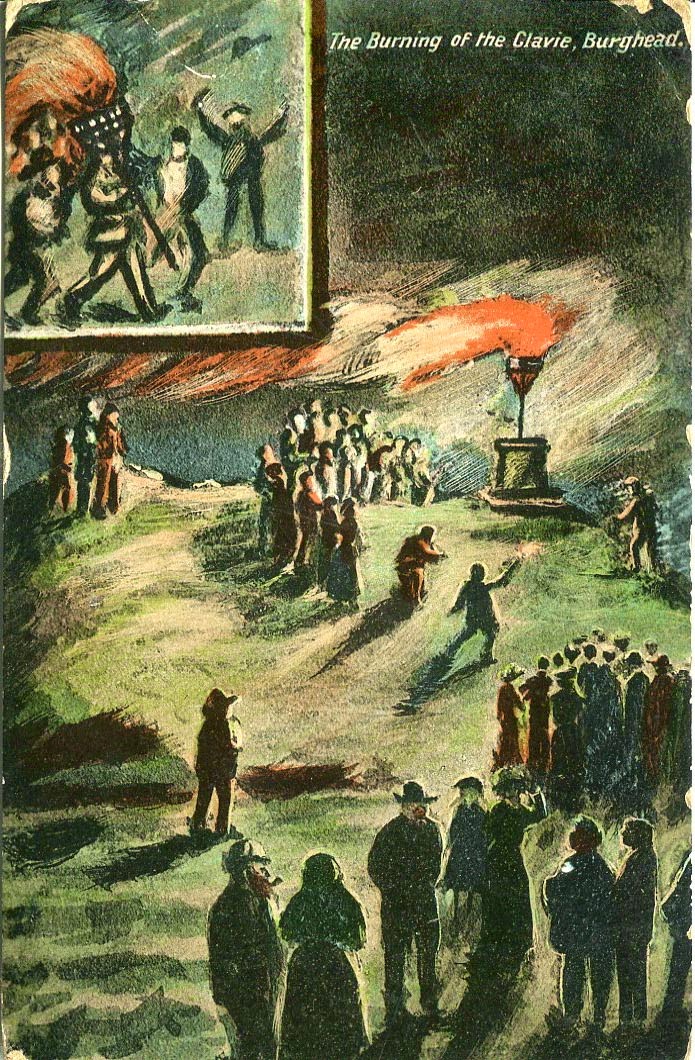 This card, however, is more culturally based, showing one of Burghead's unique celebrations.  It is the Burning of the Clavie, a continuation of a New Year's Eve ceremony that takes place on January 11th - the eve of the new year on the Julian calendar.  After the Gregorian calendar was adopted, the people of Burghead decided they would celebrate twice (knowing the Scottish reputation, I'm assuming it involved some alcohol). A barrel is split, put on a pole, filled with tar, and lit on fire - the Clavie (they may, by the look of it, now have a permanent Clavie that staves are put into - any Burghead people want to add to this?).  It is then carried around the town to a pile of other split barrels where the Clavie is placed.  When it falls apart, the fire spreads to the other barrel bits.  People collect pieces of the burning wood to start their New Years fires, and charcoal from the Clavie is put up the chimney to keep out bad spirits.  I am sure there is a much longer story steeped in further tradition and belief, but this is the best I'm going to do at the moment.  It sounds like a fun time.


Here's the back of the card: 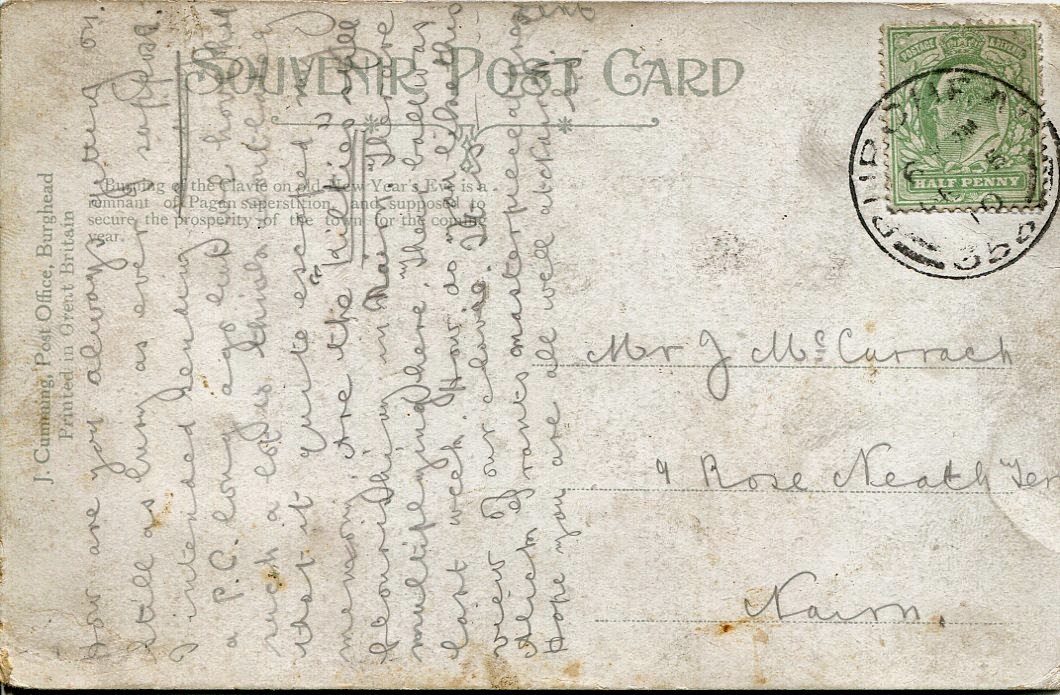 "How are you always getting on.  Still as busy as ever I suppose.  I intended sending a P.C. long ago but we have had such a lot to think about lately that it quite escaped my memory. Are the "Kilties" still flourishing in Nairn.  They are multiplying here.  Their ball was last week.  How do you like this view of our clavie.  It is Alicm (?) Franks masterpiece at present.  Hope you are all well at Nairn.  S.S."

The initials narrow down further who Sarah might have been.  If you remember, in the Seaforth Highlander's postcard post, there were three Sarah's who were about the right age to be friends with Jack:  Sarah Robertson, Sarah Sandeson, and Sarah Stewart.  So now we are narrowed down to 2.

I'm not sure who A. Franks was - and not sure if he/she painted the picture or was in charge of making the Clavie.  Anyone have any ideas?

On a different note, I've found out more family information.  I've been in touch with my mother's cousin (one of Jack's grand-daughters).  She is quite interested in genealogy and had some information that I did not yet have.  A relative of ours in Scotland had researched Jack's family - his brothers and sisters.  The list had 12 children noted.  Since I had only ever seen 5 children named in the censuses, I assumed that relative had done something wrong or been confused.  But when I found the original of the 1911 census, I found out that he was right:

The column headers in the last 3 columns read:  "Duration of Marriage," "Children born Alive," and "Children Still Living."  According to the relatives letter and the census material I've seen, the first 6 children lived.  The last 6 children died.  I'll have to do some more serious research to find out what the situation was for each of the children (or my Mom's cousin will).  I'm curious about what happened.  Also, I see from this relative's research that there was an older daughter named Helen Jane McCurrach who was called Nell or Nellie.  I assume she got married and stayed in Scotland.  Again, more research required.

But I can't help but weep for Susanna and John McCurrach losing 6 of their 12 children.  Lordy.

The child mortality rate in 1900 in Britain was about 14%.  This family's was 50%.  I did look up the first of the children to die, and she died of Tuberculous Peritonitis.  The next in line died of "Supposed Marasmus from birth" - malnutrition.  Meaning that Susanna didn't have enough to eat, either.  To think that they didn't have enough to feed their children or themselves.  Maybe that's why Jack was only 5' 1 1/2" tall.