This postcard was sent "To A Scot Abroad From A Scot At Home."  It was sent October 6, 1911 and arrived at the Fraser Avenue Post Office in Vancouver October 18. 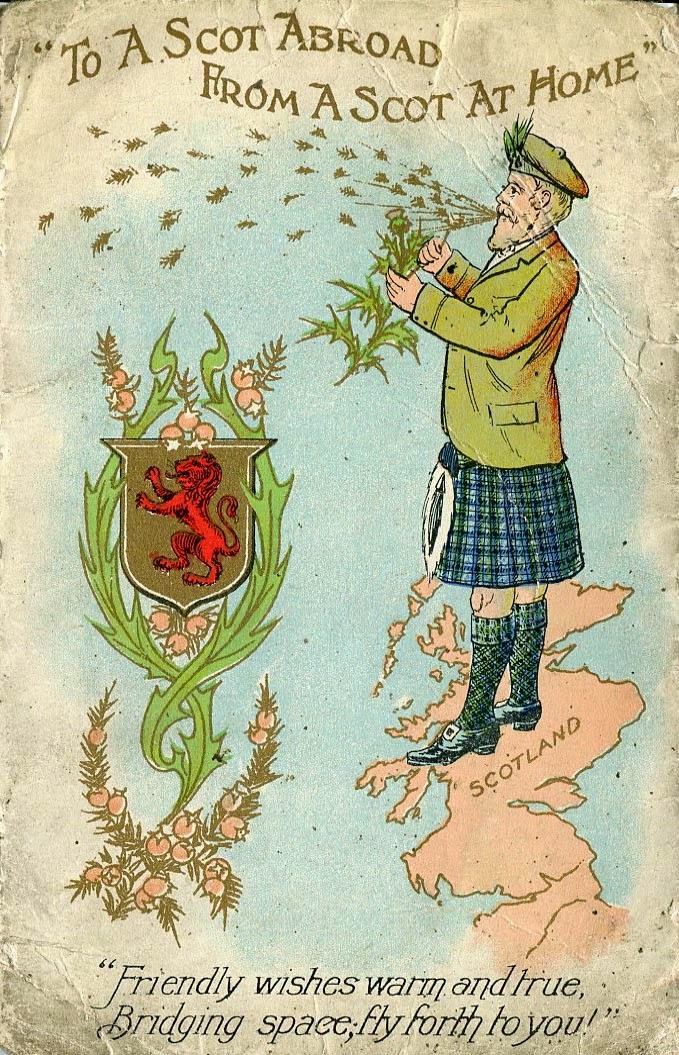 I am slightly disturbed by the breath blowing out of this man's mouth (not sure why), and the seeds that remind me of the dreaded dandelion, but other than that, it's a nice sentiment.  This postcard, possibly due to it's texture or light colour, is particularly dirty compared to most of the others in the collection.

The rampant lion is a common motif in heraldry and is a primary part of the Royal Coat of Arms of Scotland.  Can someone tell me if this particular form of lion with thistle leaves and berries is seen elsewhere?

Four postcards previously (#10 - Madeira, #13 - Seaforth Highlanders, #18 - the MacLean Memorial, and #24 - the Burning of the Clavie) , I've talked about the author of this postcard.  Her name is Sarah and she was from Burghead, on the coast just to the northwest of Elgin.  Up until now, I wasn't entirely sure who Sarah was, but in this postcard is the last piece that puts this puzzle together:  "D.J. Thanks very much for nice P.C. Glad to hear you are getting on well.  I had quite given up hopes of hearing from you again but when I did it was with a vengeance.  We are all quite well just now.  Maggie is at home for a few weeks just now.  Poor Anna had to come home owing to bad health.  She is pitiful right now Jack.  you would hardly know her.  I don't think she will ever get better.  Yes there is great word of the "Kilties" just now.  They are to camp in the Brock next year.  We will miss you seeing the C.B. Tartans are to be there.  Kindest regards.  Sarah." 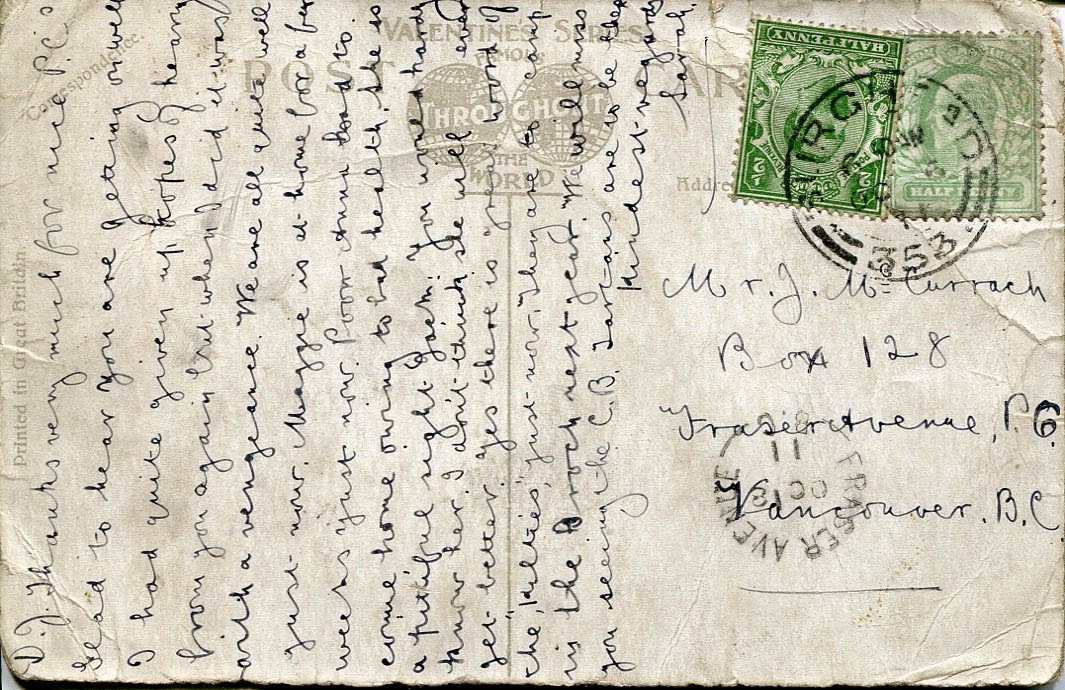 The 1901 census shows us that Sarah Sandeson, the daughter of William and Isabella Sandeson, had a sister named Maggie, and one named Annie.  So our mystery is solved.  We have a name and a family, but I'm still not sure what relationship the families had with each other - likely friends, possibly relatives.  I'll have to look a little further into that.

She mentions the "Kilties," which the "Free Dictionary" (quoting Random House) defines as "a person who wears a kilt, esp. a member of a regiment in which the kilt is worn as part of the dress uniform."  From the context it sounds like military men were congregating there for camp. This is the second time she mentions the C.B. Tartans.  Jack was a member of the 4th Cameron Highlanders, and I suspect that this is what she is referring to.

The "Brock" is noted in "Notes on Burghead" (p.45):  "In a summer evening, with a smooth sea and a gentle breeze playing on the waters, no more pleasant seat can be had than on the top of the 'Brock Bailies' (by which name the high ground above the harbour is designated), and the outlook on the clear blue sea, with the mountains of Boss, Sutherland, and Caithness in the distance, and the magnificent entrance to the bay of Cromarty, lighted up with the rays of the setting sun."  If there is anyone out there familiar with Burghead, perhaps you could confirm where that area is/was.

More personally, she is expressing her fear that she was not going to hear from Jack anymore.  And the indication is that he is busy and losing touch with his Scottish friends.  Something that was liable to happen, and all too common with people who moved so far away, I'm sure.

View next postcard post.
Posted by Sandi Ratch at 10:28 AM