The information on a postcard can lead you to the strangest places - like this one - the author of this postcard ended up being buried within metres of this bridge.  It's always fun to find such synchronicities.


This postcard of the Bridge of Ury was sent from Bella Ivers in Inverurie to Mrs. Susanna McCurrach (my Great-Great-Grandmother - Jack's mother) who lived at 9 Roseneath Terrace in Nairn Scotland.  Nairn is located on the Moray Firth, 17 miles east of Inverness, while Inverurie is some 115 km from Nairn, inland on the way to Aberdeen.  The card is postmarked June 8, 1909. 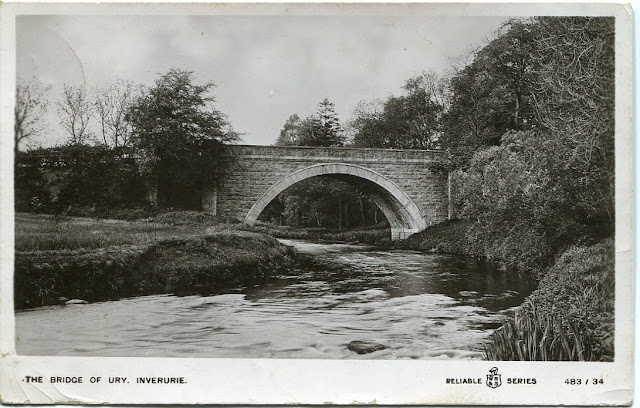 Roseneath Terrace is where Susanna, her husband John, and at least 4 of their mostly adult children lived at the time (including Jack).  A narrow little street that looks more like a side ally to this Canadian eye.  Number 9 has since been demolished and replaced by a modern building (looks like pink stucco middle left of the picture).  From looking at maps of the time, number 9 appears to have been a fairly roomy house with garden space around it.  Not bad circumstances for the McCurrach family by this point in their lives.  Better than anywhere else they had ever lived. 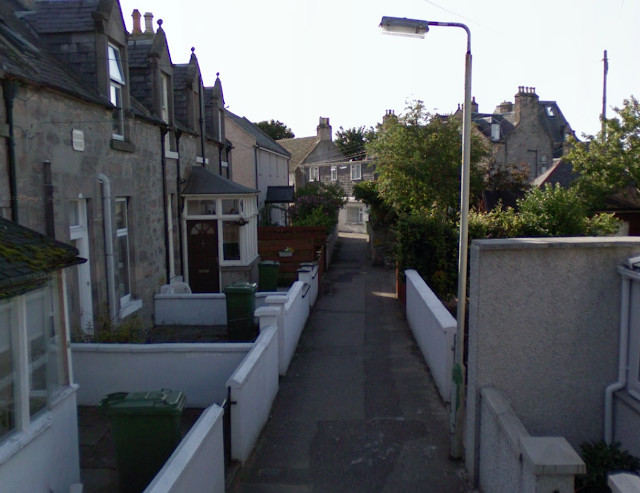 Roseneath Terrace is situated in a part of Nairn called Fishertown and is just a couple of blocks from "The Links" - a public space adjacent to the Firth.  At this time there was a large hotel next to the links as well as a bandstand, a monument and a children's playground.  There's a cricket pitch there now, and probably was back in 1909, too. 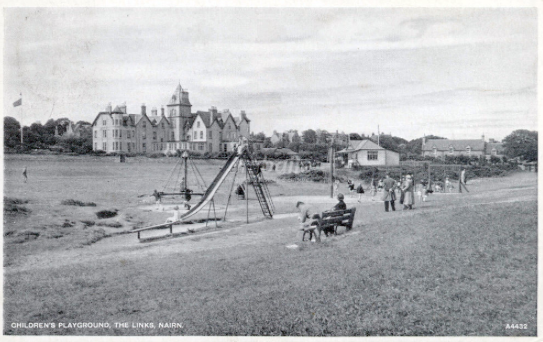 Children's Playground, the Links Nairn.  Postcard from the Highland Libraries #37411

During Victorian times, Nairn was a summer vacation destination.  It would have been a very nice town to live in.  Heck, probably still is.  I hope to visit someday soon.

The postcard reads: "We arrived home safe and enjoyed ourselves immense on the way.  although we were all a little tired but we spent a very pleasant day, thanks to your kindness.  Give kind regards to all your family and accept some yourself from Bella Ivers Whinhill.  Love to Mona XXXXXX" 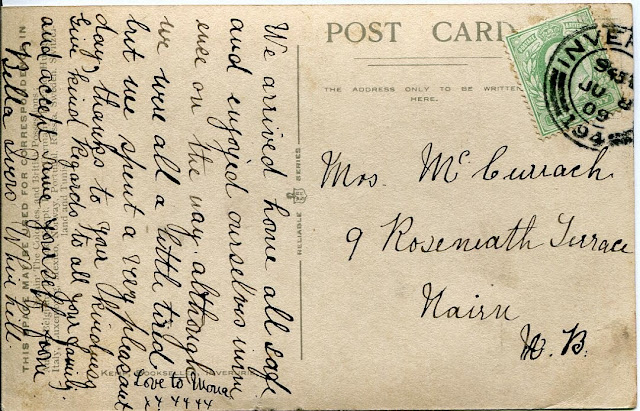 Bella and whomever else was with her must have taken the train back from Nairn to Inverness - it was the most common type of travel and there was a train that went from one to the other.

Inverurie is to the Northwest of Aberdeen.  This bridge crosses the River Urie on Keithhall road.  Here is what it looks like today: 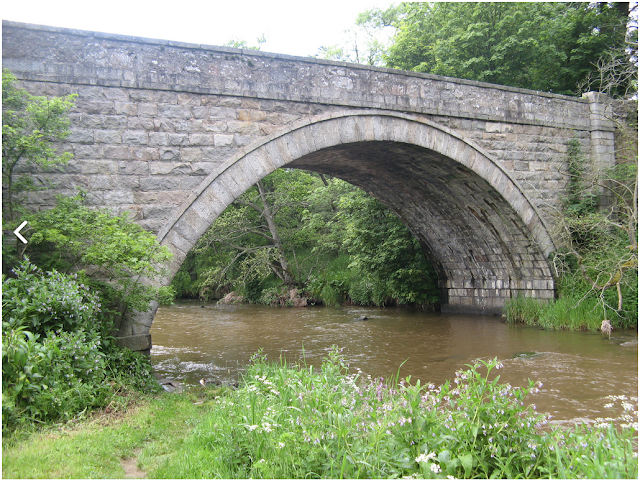 Henry and Isabella Ivers, in 1901 (census data), lived at 13 Gallowfold Lane - which I assume is Whinhill cottage - "A substantial cottage, situated at the N.W. (North West) corner of the Gallows Fold.  The property of Mr. Grubb, Burghmuir", according to the Aberdeen Ordnance Survey name book from 1865-1871.  She was born about 1861, so by 1909 she was in her mid- to late- 40s.  She would be the same age as Susanna McCurrach.

Here it is in this detail from the 1869 Ordnance map of northwest Inverurie - Whinhill Cottage!: 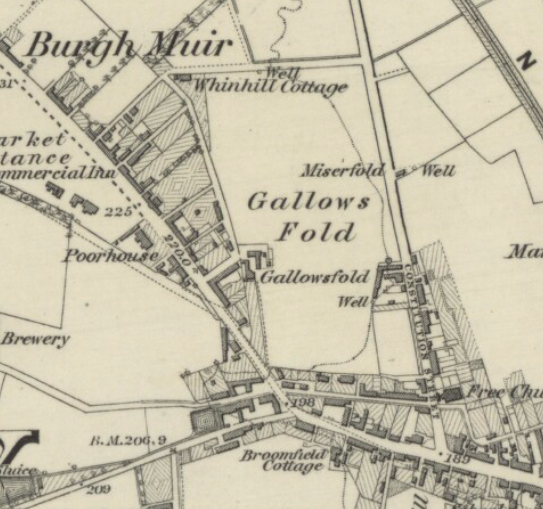 It must have been nice to take the train to the coast and visit with friends. 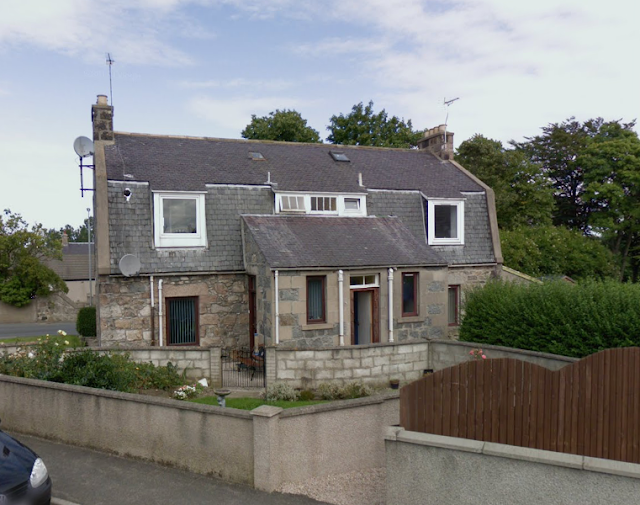 In 1881, they had lived at Strathburn Cottage in Middlemuir Road, which I believe is this similar house: 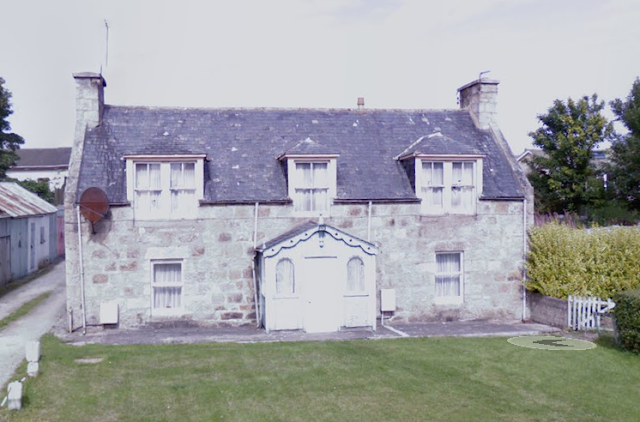 The Bridge in the picture crosses the Ury in the bottom right corner of this image: 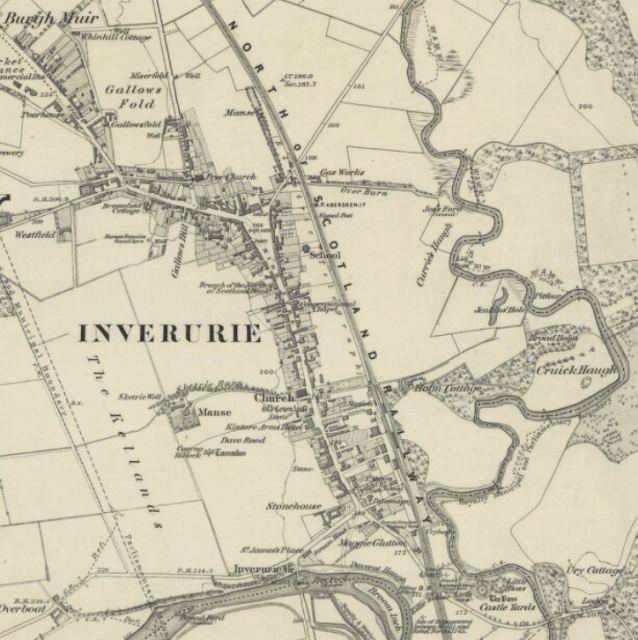 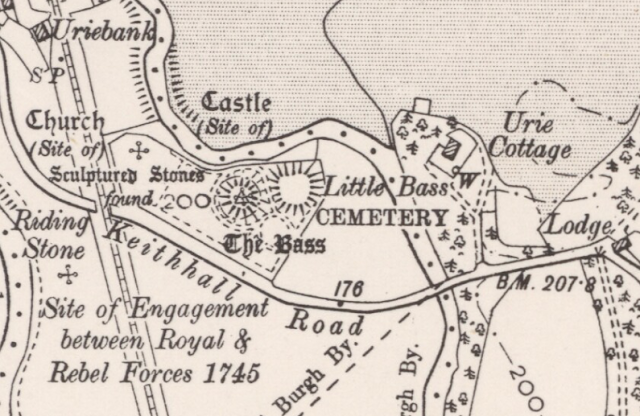 This has been a very busy area historically.  Just for context, the dotted line that runs from top left to bottom right-ish is the River Ury and the bridge is where Keithhall Road crosses the river.  By looking at the map, we see there was a battle here during the Jacobite uprising.  This was also the site of a medieval church and there are carved Pictish stones found here that were originally part of the church walls.  Two mounds, together known as the Bass of Inverurie, are what is left of the Earls of Garioch castle built in the 1100s and used as a military base by Robert the Bruce.  And it has been used as a cemetery for at least 115 years (the 1869 map does not show a cemetery).  source 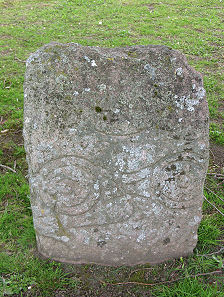 As it turns out, Belle and Henry Ivers ended up being buried within sight of that bridge after they died in 1942 and 1933, respectively.  Here you can see the cemetery with the bridge in the background: 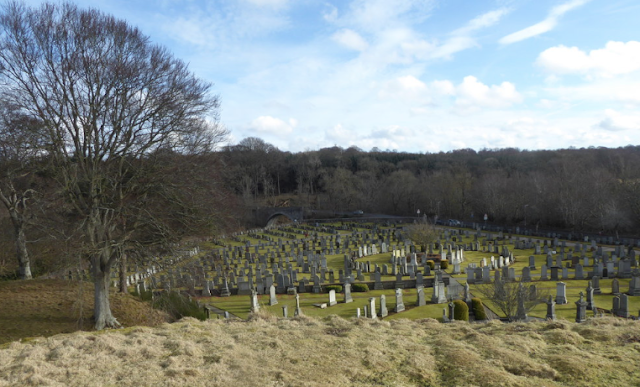 And here is an aerial view - blatantly stolen from Canmore.org.uk (sorry Canmore, but I'm not making money on this, so I can't pay!):

Belle and Henry also had a son, Colin Ivers, who served with the Gordon Highlanders and (by extrapolation of his death being in Belgium on August 2, 1917) was killed in action at the Battle of Pilckem Ridge - the opening attack of the Third Battle of Ypres or the Battle of Passchendaele, just three weeks before Jack McCurrach was wounded in Lens, France. 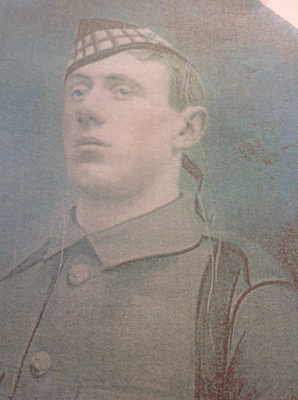 The road that crosses the bridge leads to Keith Hall - about which I write in the next post.