Sent June 25, 1909 from Pitcaple, Aberdeenshire, from L. Sim to Mrs. McCurrach (my great-great-grandmother) at 9 Roses Place, Nairn (Roseneath Terrace, actually, but I guess it go to her anyhow.) 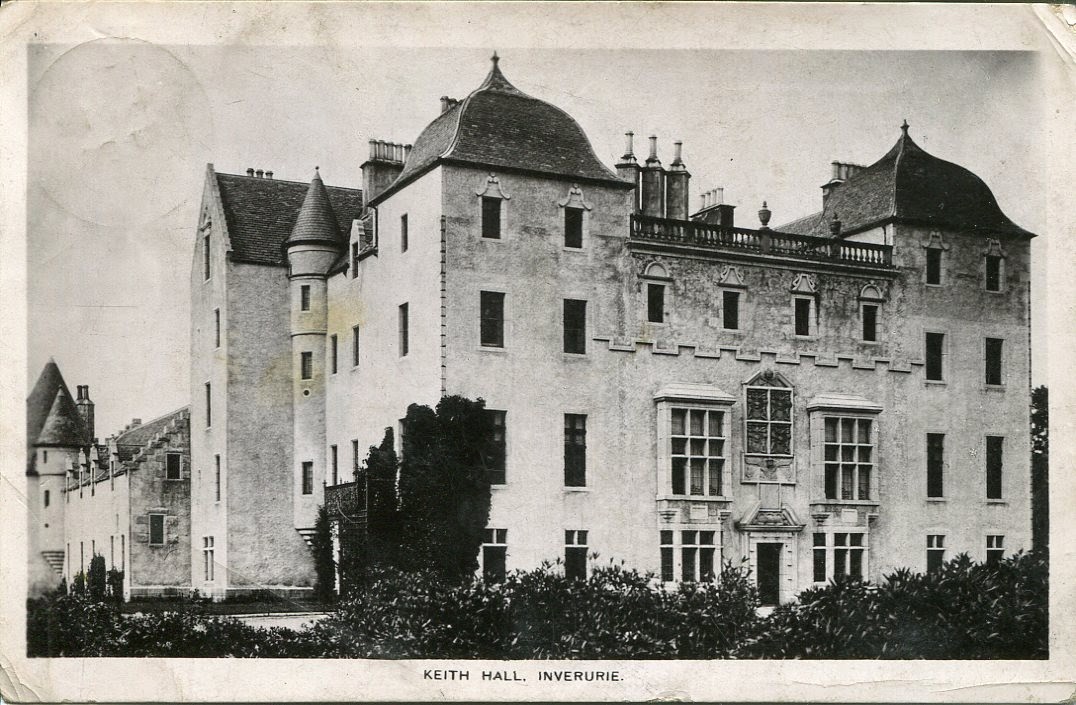 Located (strangely enough) east down Keithhall Road and over the Urie Bridge (as seen in yesterday's post) this beautiful structure is just outside of Inverurie.

Keith Hall is a very interesting place.  A look at Keith Hall on the 1901 Ordnance Survey Map from the National Library of Scotland (thank you NLS for this AMAZING resource!) gives us an idea of the size of the establishment before WWI (and a glimpse into its history): 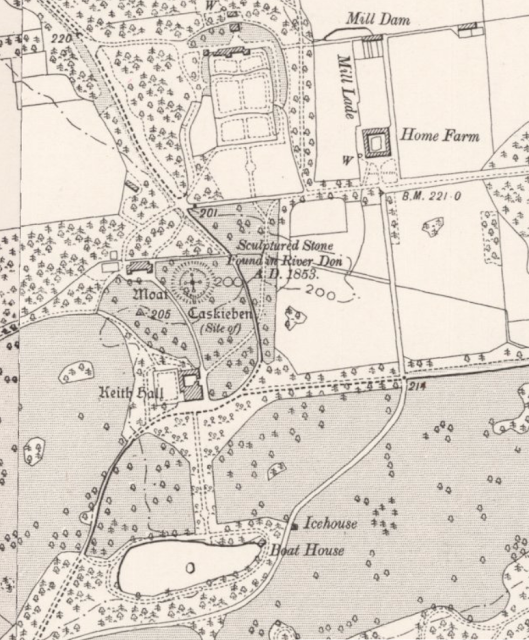 You'll note to the north of Keith Hall, the location of Caskieben with a moat around it.  Caskieben, meaning "Wooded Hill" was a palisaded wooden tower structure built by the Garviach (Garioch) family during the Norman expansion into Scotland in the 12th century.  The Moat surrounding it was 2 metres deep and 15 metres wide - hard to get around, I'm sure (source).  I'm assuming there must have been a drawbridge over the moat.

The hall that we see today began construction in the 13th century as a replacement for the tower structure.  It was also originally called Caskieben, but later named Keith Hall.  Sir Andrew Garioch of Caskieben in the 14th-century was (obviously) a Knight.  My mind goes a little wild imagining knights in armour on horseback jousting in the fields. Very classic Romantic imagery. 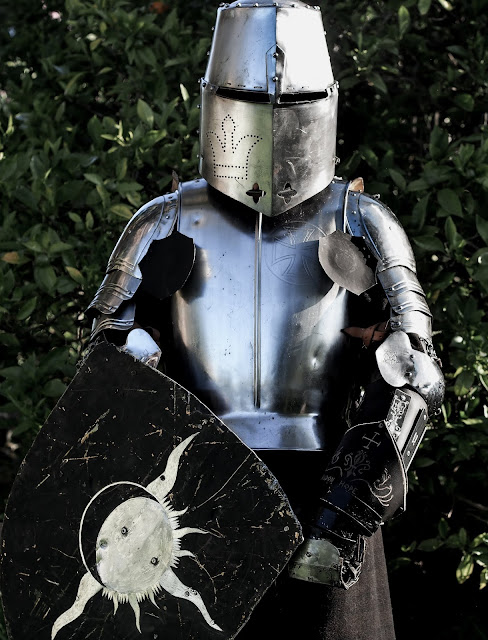 By the 15th century, the Johnston family were lords of Caskieben - followers of the Stuart kings in their attacks on England.  Combative in many ways, Alexander Johnston and others, in 1492, were ordered to pay William Hay of Ardendraught for burning the Houses of Ardendraught in the parish of Cruden (source).  Now, in my mind, knights and their armies are raiding and burning properties much like in the movies.  The imagination runs wild.

As I read more and more online, I see that this place has an amazing history which I can't possibly cover here in one post - so see next one.

(*As a side note, it is quiet something for a Canadian to be imagining knights and raids this long ago - my culture's history only goes back a little over a century in this country.  How amazing to live where your history goes back so much further).

Keith hall is recognized by Historic Environment Scotland for their Garden and Designed Landcape which covers the area with the Bridge of Ury as well. 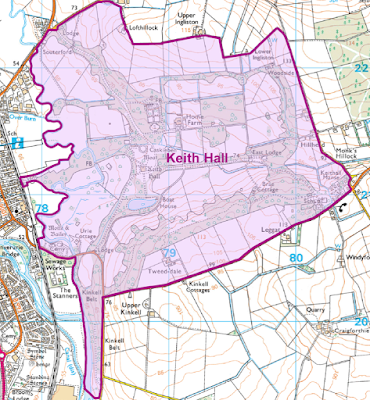 Interestingly, a couple of years ago, if you had a million dollars to spend, you could buy a 4-bedroom flat in Keith Hall!  See this link.  It has great indoor photos of the place, too.

Text is "Dear Mrs. McCurrach I am sorry for being so long in sending you a P.C. but I hope you will like this one like to stay here very much it is a lovely place, Tigh-na-mara will be rather desolate looking just now with kind regards from L Sim." 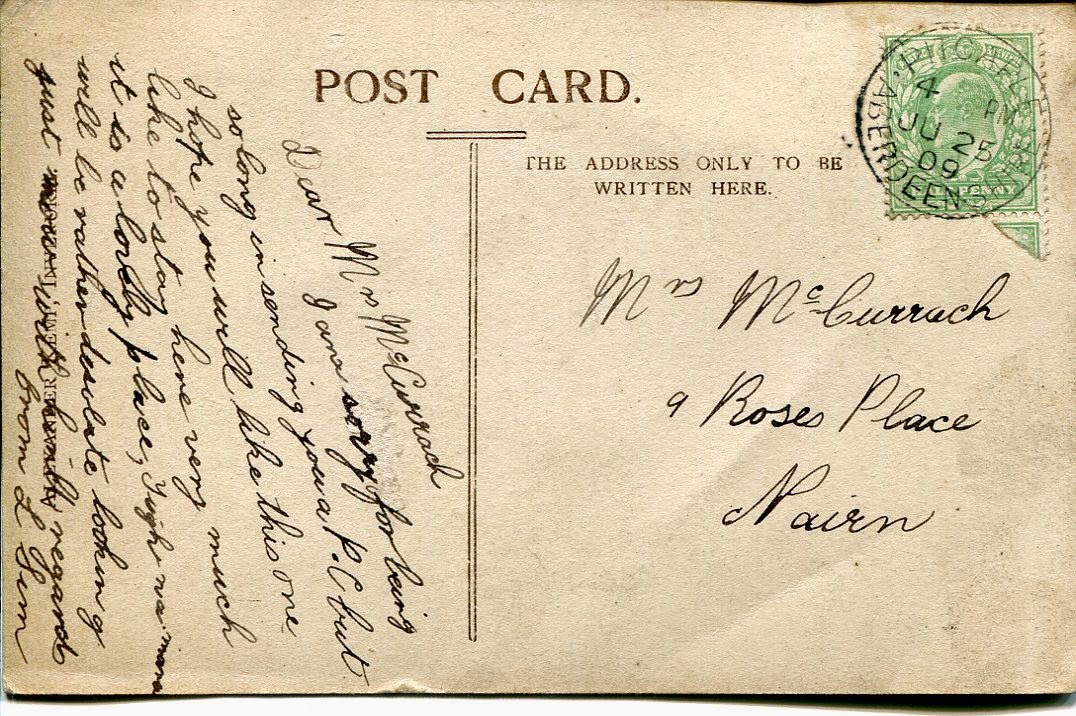 There is a Tigh-na-mara (meaning house by the sea) located on the Isle of Skye, which she could be referring to.  Although there may well be other places named such, here is a website for the one on Skye.

I'm not sure if the writer of this postcard, yesterday's and tomorrow's were all travelling together and had visited Mrs. McCurrach, but it seems that might be the case, since all of the P.C.s were from the Inverurie area and sent around the same time.