I have to say, I was a little stumped by this postcard. 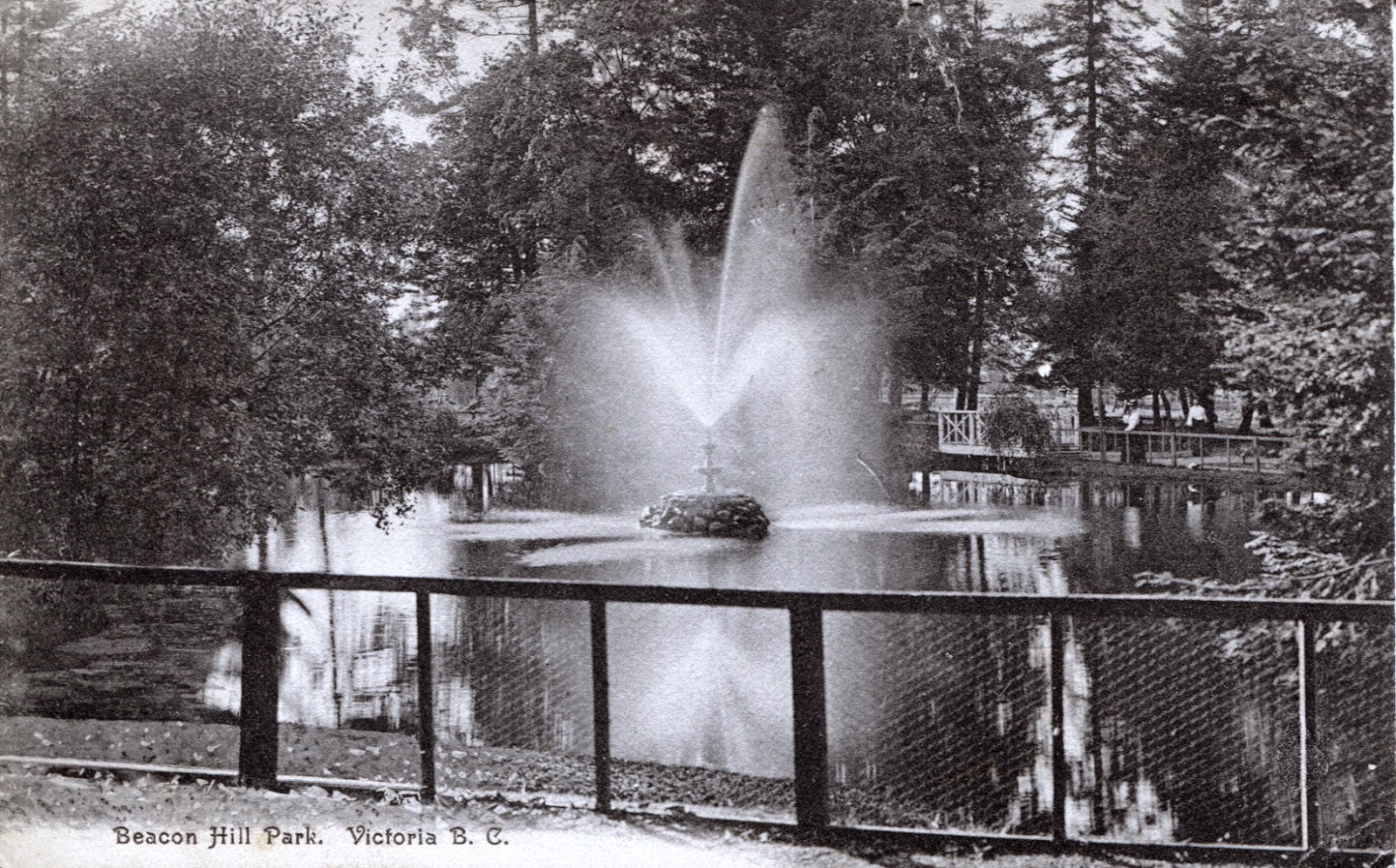 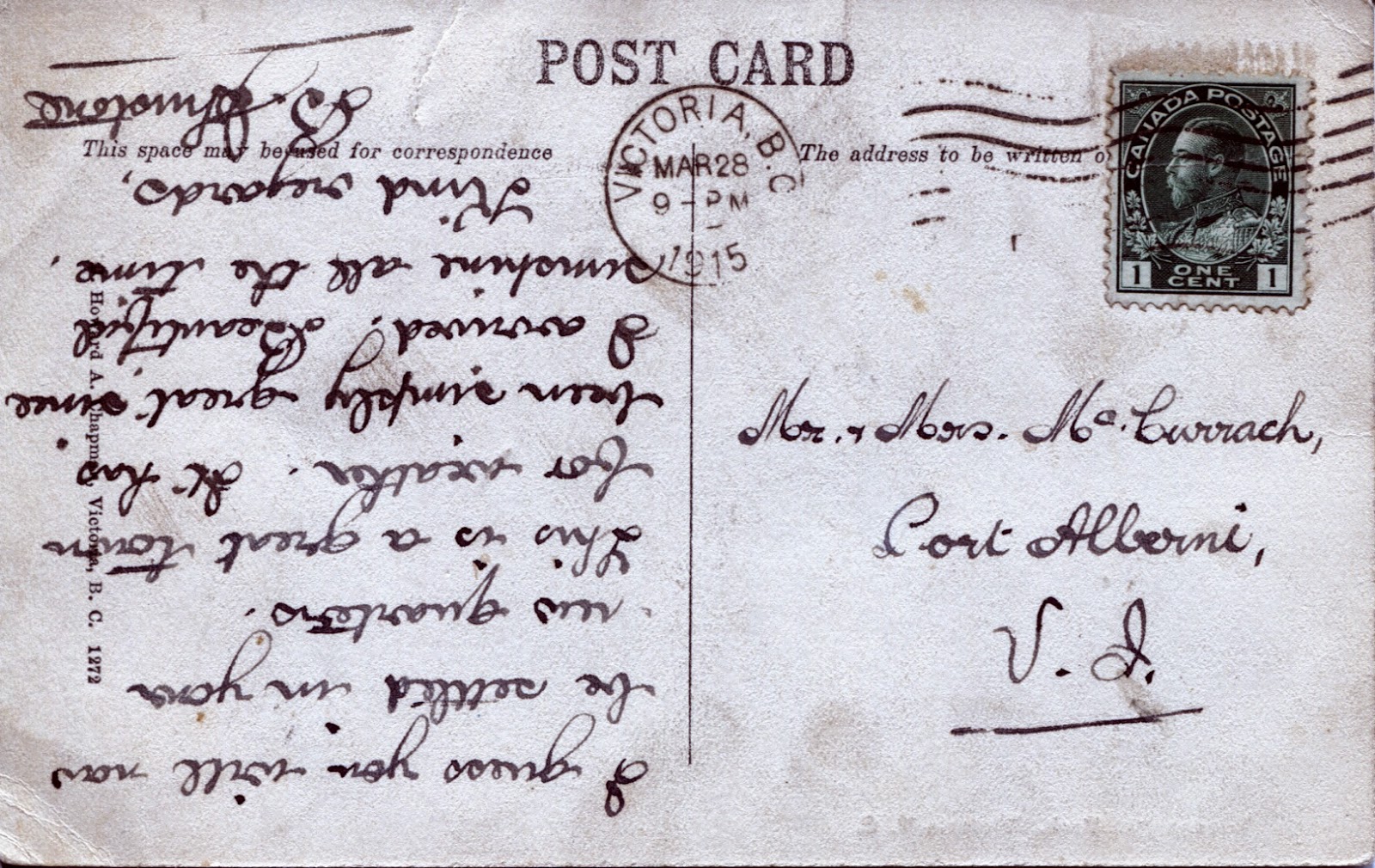 The address on the card is made out to "Mr. & Mrs. McCurrach, Port Alberni."  So what is stumping me?  To my knowledge, Jack and Nellie never lived in Port Alberni.

Port Alberni is located on a long inlet on Vancouver Island (a long trip from Vancouver in 1915): 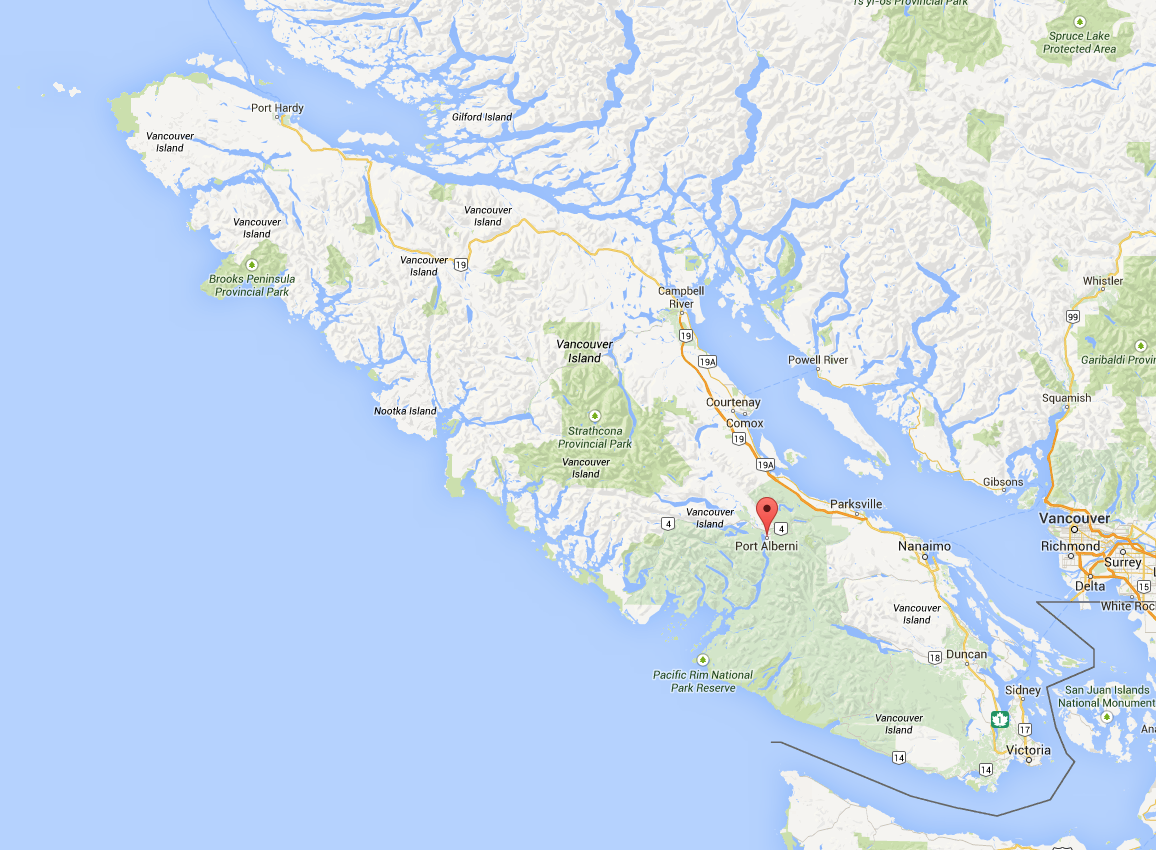 The date on the Postcard is March 28, 1915 - an odd time of the year to embark on any sort of summer vacation on Vancouver Island.  And the 1915 Vancouver city directory has Jack working and living in Vancouver.

So who else lived in BC who might be called "Mr. & Mrs. McCurrach" (and whose postcard would end up in this collection)?  Well, I know that Jack's brother, Alexander, had two wives during his lifetime (not at the same time).  When I started writing this, I knew that his first wife was named Matilda and his second was named Mildred.  I knew that Matilda had died in 1920 and that he had married Mildred in 1923.  I couldn't find Alexander and Matilda's marriage records, though.  I checked Ancestry and Scotland's People and I was confused.

Well, I tried Ancestry again today.  And when I took Alexander's birthplace off of "Scotland," I got a hit.  Turns out that Ancestry spelled it "Soctland" on his wedding entry.  You do have to take possible spelling errors into account.  Anyhow, I found that he and Mildred were married October 24, 1907 in Ontario - turns out Alexander was living in Toronto before he moved to Vancouver.  Surprises happen every time I do this research.

It is quite possible that he and Matilda moved to Port Alberni for some time.  As a matter of fact it looks like Alexander was away from Vancouver from 1915 until 1919 or 1920.  I don't know a lot about Port Alberni, but it is quite possible that there was a bit of a boom with World War I - they were a major source for lumber and they had a western port.  So he and his wife may have gone there because of that.  Again, we may never know.  But I'm quite certain that it must have been them over there.

The postcard itself was sent from Victoria and shows a fountain in Beacon Hill Park - the Central Park of Victoria.  Beacon Hill Park would soon take on a certain significance in Jack McCurrach's life, but not yet.  From what I can find online, this particular fountain is no longer there, but Beacon Hill continues to be a beautiful public park right beside downtown Victoria.  If you every visit the city, you must visit the park.

The writing on the card states:  "I guess you will now be settled in your new quarters.  This is a great town for weather.  It has been simply great since I arrived.  Beautiful sunshine all the time.  Kind regards, B. Johnstone."

I do not know who B. Johnstone is.

View next postcard post.
Posted by Sandi Ratch at 4:06 PM